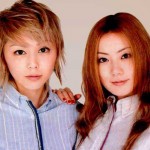 I’ve been listening to Puffy a lot lately. And no, I don’t mean that lame-ass, track-stealin’ mark, Puff Daddy, or P-Diddy or whatever he’s calling himself this week. That guy is an artistically bankrupt leech and I wish he was standing right here so I could punch him in the throat.

No, who I mean is the original Puffy, a Japanese Pop (or J-Pop, as it’s called) duo of two of the cutest Japanese girls you’ve ever seen, who never fail to make good-feelin’, foot-tappin’ tunes that you just cannot, try as you might, get out of your head. Their latest (and I think best) album, Spike has even been brought to the states recently, though their name has been changed to Puffy-AmiYumi (Ami and Yumi being the names of the girls, respectively) so as to avoid any confusion with dire states of wackness.

That’s Yumi-chan on the left and Ami-chan on the right. NOTE: If it’s the last thing I do, I will marry Yumi-chan. (maybe not, but it’s a nice daydream that helps me through the slow days, ya know?)

Anyway, the particular track that I just can’t get enough of lately is called Swimming Pool. It’s more mellow then most of their tracks, but still very Puffy-ish. Let me know what you think, or if you want to hear more. I’m always up for doing my part to facilitate the birth of a new Puffy fan. 😀