One of the first things you notice when you step off the plane and into Japanese culture is the ubiquitous mobile phone. Everyone has one and they always seem to be using them at all times. It’s like walking into some weird sci-fi flick where everyone is constantly typing something on their wristlinks or something, it’s just insane. The second thing you notice, once you get a closer look, is just how phreaking hi-tech these things really are. (10 Hair Flap bonus points to those who get the phone-hacking pun in that sentence!)

Okay, enough small talk. Let’s get to the part where I openly mock the pathetic state of American cel phone technology.

I feel sorry for all you poor saps. I pulled out my old phone the other day when I went to an Elementary school to give my self introduction because the kids always get a kick out of seeing an ‘American’ cel phone. In the midst of showing this piece of outdated electronic artifact, I had to take a silent moment of thanks to the powers-that-be for allowing me to leave such Paleolithic ‘technology’ behind me. I’m serious, I can’t even be vitriolic enough when talking about this stuff. 😉

For the purposes of this entry, I’m going to use the Nokia 6100 as a basis for comparison with my Japanese phone since it’s a fairly well-known handset in the states and is nearly the same size and weight as the ubiquitous 5100.

Enough of the intro, let’s begin.

I think it’s safe to let the pictures do most of the talking here. The Panasonic P503i is about half as thin as the Nokia and believe me when I tell you it’s at least half as light. Thanks to the impressive state of battery technology, you can totally forget this thing is in your trousers pocket – something I’m not able to say about the Nokia.

Another thing to mention about the battery is it’s impressive lifespan. This thing could probably go a month on standby and I routinely go days at a time without a recharge while actively making calls and using email/internet (which we’ll get to in a minute). That’s pretty amazing when you consider it’s size relative to the Nokia’s battery, which would last me maybe a day and a half with the same habits of use.

Oh God, then there’s the screens. Before writing this update, I hopped onto some American service providers to check up on the current state of mobile phone tech, and was somewhat surprised (though maybe I shouldn’t have been) to see that all the handsets are still using greyscale screens!!! For the sweet love of all things electronic,WHY!?!? If you’ll notice my red phone in the first picture, you’ll see it’s sporting a color display (as well as a stylish Porco Rosso phone strap :). It’s even a cheap color screen. There are models here that boast as many as 32,000 colors!! I can never go back, it’s that simple. 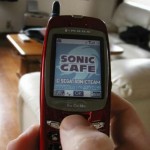 Okay, here’s where the differences really start to show. How many of you have accessed the internet on your cel-phones? Stop, stop, STOP!! Everyone who raised your hands, put them DOWN! Unless you’ve been to Japan recently, none of you should have a hand up. Dammit. I’m not talking about that weak-ass WAP protocol stuff (WAP is a basically a watered down internet designed for inferior phone tech), I’m talking actual html. Yeah, I see far fewer hands this time.

The big internet service here is called iMode (though other service providers have similar services, dubbed J-Sky and EZ-Web), which allow you to get on the internet and read honest-to-god html web pages. Take THAT, Voicestream!!

Now, I should take a break from my tirade to admit that there are limitations and this isn’t the Garden of Internet-Eden stuffed into a mobile phone. Because the phones are so dang small there’s extremely limited physical memory to store the web pages you’re viewing, thus you can only load the smallest of pages, or pages that are mostly text based. The result is that there’s a whole bunch of sites specifically designed with low hardware demands just for iMode usage.

You might ask what’s the difference between that kind of watered down internet and WAP, which I just dissed a few sentences ago. Well, the significant difference from WAP is that it’s not a whole separate protocol that needs to be developed and maintained, it just uses the internet that’s already there which opens up a whole lot of possibilities that WAP will never be able to handle (you can even access iMode pages from a regular computer, they’ll just look kind of sparse). 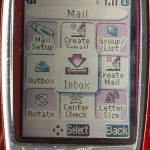 Another bone of contention I have is that in the States email is an extra service that you have to pay through the nose for. Here it’s a God-given right. You see people everywhere doing mail. When I first arrived in Japan, I was honestly shocked at how often you could see people standing around typing messages into their phones. 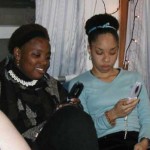 Sure, I suppose that the newer Nokia 3390 has email and some kind of AOL Instant Messenger (Why? Can you really type an IM message faster than an email on a 10-digit keypad??), but even then the phone itself runs $70. I got mine for less than $15. Voicestream, can you hear me? I’m pulling down your pants and mocking you. (I used to be a Voicestream customer if it’s not yet apparent.)

The games. Ah, yes. The Games. Hardly a vital make-or-break feature of any mobile phone, but they sure are nice on a boring, 20-minute train ride into the city. They’re also a great feature with which to show off the technological superiority of Japanese phones. As usual, the best way to show this is probably through pictures. First, as a basis for comparison, let’s take a look at the Nokia 6100’s offering.

Well, that was certainly lame. Now that I’m done wishing I were dead, let’s move on to the Panasonic 503i.

And that’s not all!! A nice side effect of these phones being able to use the “real” internet is that most of them, the recent models anyway, can handle Java applets (little mini-programs), so you can basically go online when you get bored of a game and just download a new one!! Most of the above, with the exception of Tetris andDance Dance Revolution are all downloaded games. Just shagging brilliant. That’s all I have to say about the issue.

The best part about all of this cel-phone hullabulloo (how do you spell that word?) is that it’s getting better, quickly. The service provider AU just released a phone with an LCD screen designed to play back videos that you download, while DoCoMo is slowly phasing in the first incarnations of 3G (3rd Generation) technology, designed to give every phone broadband internet access. Just the other day, I saw a pair of cel-phones in a store demonstrating live-camera calling. That’s right, all you Dick Tracy wannabies; while it’s not widespread yet, the technology has indeed arrived as promised.

Certain friends who shall go nameless here, keep prodding me to hurry up and return to America. But I gotta be honest friends, with cel-phones like these, it’s gonna be hard to go back.