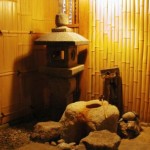 I hope everybody is ready for another journey into the waters of theme-less…. uhhh….website-ness (I really must stop making up my own words all the time and use the ones that are already there). I’m just gonna write whatever comes to mind until there’s an update’s worth of material on the page. Everybody ready? I don’t care either way, so let’s just go. 😉

So as I mentioned last time, I got a haircut and bleached what was left instead of going the afro-route, much to Fletcher and Rory’s chagrin. It actually got an enormous reaction at school which kind of surprised me. I figured most everybody would just say, “Oh, there goes Scott, being a gaijin again,” and forget about it. Yeah, right. It was like the first day of school all over again, people crowding around and mumbling to each other. The best part was when one student came up to me and said, “It’s very cool! It really makes you look American.” I was totally deadpan as I replied, “Well, you know, I was actually American before too.” She stroked her chin and pondered this fact as she said, “Yeah, I guess so, huh?” 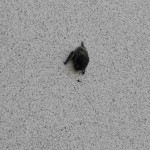 Here’s a picture of the bat that was sleeping on the side of my apartment building the other day. Yes, I did, in fact, say bat.

We also have a couple of new offerings in the Engrish section.

A few weeks ago, Angela, Phil and I met up in Fukuoka and went to see Jamiroquai in concert! Talk about Phun(which is similar to just plain old ‘fun’ but has a much higher Ph content. [Again with the wordmaking! When will it all stop!?!])!! The funkdified soul-swing-sounds of these badass-boogie-brothas had us dancing our sweet asses off all night!! 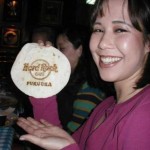 I think we must have caught some kind of boogie-bug that night, cause we’ve been going out dancing every weekend since. And while I can’t speak for the others, I’ve been a non-stop dance machine in my apartment whenever the stereo is on, which is always.

The other night, as I mentioned briefly in last weeks update, was Phil and Tonia’s birthday party, so we all met up at Hard Rock Cafe – Fukuoka where I indulged in an obscenely huge American-style hamburger, and Tonia indulged in a tasty looking fajita wrapped in the horror that is known as the Hard Rock Cafe Tortilla Shell. The words classless, offensive and chaps come to mind (Wait….what?? I was made to say chaps!! Really!!)

After that, we ended up at a place called Club Zoom, where the voracious booty-shaking once again resumed, this time to the tranced-out, techno sounds of DJ Iforgotwhathisnameis. Despite the fact I have no idea what his moniker might have been, this guy was rocking our worlds. We just couldn’t stop!! Angela turned to me at one point and said, “I just can’t stop.” (See? I told you.) It was so good that I was totally dehydrated from sweating so dang much and really needed some water at one point, but it wasn’t until an hour after this realization that I was actually able to drag myself off the floor and get some. Awesome!

And as if that wasn’t cool enough, in addition to the DJ mixing away in his booth, there was a separate booth where a couple of dudes were using a pair of laptops to create the psychedelic video/light show that was being projected on one wall and other numerous TVs scattered throughout the club. The best part was that the laptops in question were a pair of Titanium PowerBooks, which looked awesome in the dark club with the Apple logos glowing off the back of either screen (as you can imagine, this went over well with me). So in effect, what you had was one booth mixing the audio and another booth mixing the video. How sweet is that? I want to get up and dance right now just thinking about it. All right, I’m up!! I’m dancing!! Does it please you when I dance? Dammit, what the hell am I talking about!? I think somebody spiked my tea at lunch today. :O