I’d like to be able to say that I had no warning that the life of a JET would be so hectic, time-consuming and utterly exhausting, but the truth is I did. Former JETs, The Consulate General of Japan in both Portland and Seattle, the roughly 4-billion JET Handbooks that I’ve relieved from the Japanese Government, they all said to be ready for heavy demands on your time and be careful not to let yourself get overwhelmed. All of which is making it really hard for me to justify bitching about it now that I am indeed, Busy-As-Hell.

For those of you that have never been to Japan, being a gaijin, or foreigner, is an interesting experience. That is, if you’re an obvious gaijin. If you look Asian, people probably won’t give you a second glance, but if you look to be of African, European, or Antarctican descent (which I guess would make you a penguin or something), then get ready to live like a rock star. That actually doesn’t apply much to the larger cities, like Tokyo, Kyoto and the like where you can happily disappear into comfortable anonymity, but if you’re in a smaller town such as my home of Fukuma (pop. 45,000) then you’re pretty much a local celebrity. The result is that you and Fletcher end up being featured in the town magazine every other month which results in everybody wanting to be your friend and inviting you to everything under the sun.

Beyond that, there’s just the fact that the job of JET can be pretty demanding at times. My teachers at school seem to be getting comfortable that I can actually come up with something to do for a class period if given more than 10 minutes advance notice, so I’m finding that I’m having to actually coming up with lesson plans lately. In addition, some poor fool at the Town Office mistook me for someone with a handle on the Japanese language and so thought it would be a good idea to give me a project translating a series of inheritance documents(!!) into English for some American beneficiary back in the states. Combine all this with my weekly schedule of Tennis practice, dinner with the Nakamura family, Japanese study, this site and the usually one or two unforeseen, impromptu invitations for yakitori or a few drinks (which are usually slightly rude to turn down) and all of a sudden I’m trying to remember what a Dreamcast is and what you use it for, which I’m sure you’ll agree is a dire state-of-affairs. Thank God that spring break is right around the corner!!

Part of the ‘dilly’ of being a JET in Fukuma means that I, on a fairly regular basis, make trips to elementary schools to spread the light of knowledge and to let myself get punched in the beanbag by little munchkins. These visits are undoubtedly the best and worst of being an English teacher at the same time. On the one hand, they’re young, so they’re utterly fascinated by anything and everything you have to say and will definitely be into your class. They’re also small enough that you can stuff them in a drawer if they punch you in the beanbag as mentioned before. On the other hand, they’re young, so they DON’T GET TIRED and will constantly jump around you, on you, pull you in 7 directions at once and not give you a moment’s peace. I have so much respect for elementary teachers now that I feel that each teacher should have a marble statue of themselves flanking either sides of the entrance to every school. Let me give you a small taste of what the average elementary day is like for this JET. 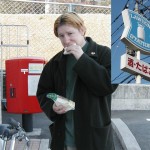 I find elementary school lunches to be downright tasty, however I also find them to be of insultingly small portions. Therefore, I make it a rule to stop at a convenience store on the bike ride to school and chow down the biggest sandwich they have, even if I’m not hungry. It seems silly at the time, but I thank myself later on. 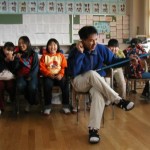 As I mentioned though, the kids are always really into class and usually the teachers are too so it actually goes quicker than I always expect. In this potentially embarrassing photo to the left, a teacher offered to sing a song that he happened to know in English. Actually me and Fletcher made him do it, even though he tried to weasel out of it because, “he didn’t have his guitar.” Quit yer whinin’, pick up a mop and sing, English-boy!! 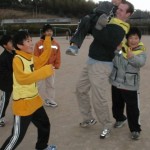 It might just be this school, but it seems like all the classes are on staggered recesses, so that basically, you only ever play with your own classroom, which must make it awfully hard to pick up on that cute girl in the class down the hall. I don’t think that’s much of a problem for these boys though since they seem to be too preoccupied with spending their precious recreation time punching each other in the crotch and sticking their fingers up each other’s butts.

I can hear you laughing. Stop it, I’m not joking. There is actually a phenomenon called kancho, in which you fold your hands prayer style and point your index fingers out so it looks like your making an imaginary gun, then stick said index fingers up the nearest person’s arse, which is apparently the funniest thing in the world. The other phenomenon aside from kancho is merely walking up to your favorite target, usually Scott or Fletcher, and punching said target in the balls. I don’t think they bothered to name that one though.

In this next photo, we can see Fletcher getting fed up and showing a kancho practitioner the error of his ways. 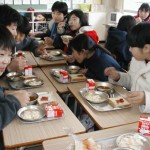 Yes, you’re reading that time right. They don’t eat lunch until One o’#%*@ingClock!!! Just one more reason for the pre-emptive sandwich.

Anyway, remember the nappy cafeteria ladies slopping crap on to your plate that are in every school you’ve ever been in? Well, in Japan they save a few tax bucks and put the kids to work slopping said crap on to your plate. It’s so cute, as soon as the lunch bell sounds, the kids of the week grab their little lunch-worker bag and whip out an apron and cap. They then run down the hall, grab the lunch cart and run it back down to the room, where everyone chips in and helps pass out the food to all the desks. It’s all part of teaching them responsibility and how it’s better to help the group then to waste time kancho-ing it. 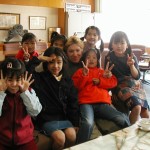 The day is finally over and my body invariably hurts from being the human tug-of-war rope between overzealous 2nd graders all day. Me and Fletch usually retreat to the Principal’s Office to say our goodbyes, drink a cup of tea and then leave for home. This used to be the first chance in the day to sit down on the couch and take a breath, but all that disappeared once the kids figured out that this is where we go when the day is over. Now it’s 30 seconds of, “Oh God! They’re coming!! Do you think they’d look for me in the heating ducts?” and then twenty minutes of Scott-Fan-Club hell. At least it’s usually the girls that ambush us here though. I’d much rather deal with incessant girly-chatter than a sore bum or aching beanbag (why can’t photos like this happen with girls my age?).

When the day is over, I actually look back on the whole experience as pretty rewarding and actually kind of fun. Sure it’s hard to remember that when four kids are pulling one arm one way, another four are pulling the other arm the other way, there’s a girl on hanging on my neck pretending to be my backpack and a fourth kid punching me in “the region,” but fortunately hindsight allows me to realize that they were laughing the whole time, having fun and maybe even learned something in class. Lord knows I’m learning a lot about my Jr. High students and even Japanese people in general by getting a chance to see how they spend their early school years, which despite a few more fingers in bums, don’t seem to be all that different than mine were.

I will now go to sleep. See you next time.