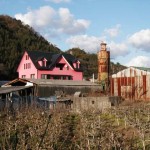 This is gonna be a sparse one folks. I’m taking off to Tokyo in a few hours and I didn’t get the chance to write up the update yesterday like I planned because I caught some pesky 24-hour bug that made me feel like general poo-poo, hence expending energy on writing was hardly near the top of the list o’ priorities.

So anyway, it’s Spring Break for the next two weeks here, so I’m taking a week off and heading up to Tokyo to play around. I’ve been there two or three times now, but I’m always pretty rushed since I’m there for some business related reason and never have the time to just walk around and take things in. Therefore I’m going up to one of the biggest cities in the world with no concrete plans at all. I’m just gonna walk around, see some cool stuff, go in some tall buildings and try and see Tokyo rather than be a tourist. Look forward to some killer pics next week.

Yet Another Irrelevant Poll

Percentage-wise, I was impressed that over 50% of you have been to Japan before. That was before I noticed that only 7 people voted!! Not that I’ve got a killer readership or anything, but I’m sure that’s not exactly a representative number. Anyway, the bottom line is it looks like a lot of you have had a taste of “The Japan” and I’ll definitely be taking that into account in future updates and try to avoid comments like, “So, you know, when Japanese people talk, it’s like, not English. Apparently they have like thistotally other language!”

I don’t work with “Normal People.” I don’t mean to say that I work with Circus freaks or anything, but all the teachers at Higashi-Chu suffer from a near-deplorable overabundance of personality. It’s like every one of them is a exaggerated cartoon caricature…. of themselves!!

A few weeks ago, you met Kumate-sensei briefly, and this week I’ve got to mention school-nurse and my desk-neighbor, Imoto-sensei. She’s very un-Japanese in that she’s not afraid to laugh at anything she might find funny even if it’s not an appropriate situation to do so. Anyhow, some of you might remember my Björk desktop snapshot from a few weeks back. Well, some teachers saw my computer while I had that picture on my desktop and more than a few commented on how they thought it was Imoto-sensei. Now while Imoto-sensei is in no way reminiscent of Björk, I have to admit that I can kind of see what their talking about.

Anyway, the staff and myself remain rather split on the issue, so I’ll leave it to you, faithful readers to decide in this week’s (absurd) poll. Does or doesn’t Imoto-sensei look like the Björk wallpaper?