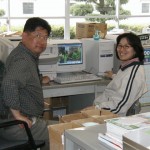 Every time I think there’s nothing new to write about, my freak-show teachers come up with some way to save the day (and it almost invariably involves Kumate-sensei in some capacity).

For example, yesterday I noticed that Ishizu-sensei and Kumate-sensei (see, I told you!) were sitting in front of a computer monitor for a long time, with looks of intense concentration, serious corroboration and the occasional pointing at something on the screen.

I strolled over to see what was confounding them so, and saw that they were consumed with the momentous duty of naming the fish in their virtual aquarium!!

Nothing surprises me around here any more.

I submit for your approval a thumbnail portrait of me that one of my first year students produced in class today while he should have been taking notes. Uncanny, I know.

So we’ve got our new first year students which means they haven’t formally had any English training yet, which means we get to start at the very beginning. And means starting with the Alphabet and the Alphabet song. And here’s where our interesting Japan tidbit of the moment comes in; Japan’s Alphabet song is not OUR Alphabet song. It’s a watered-down, sissy-mary wimpmatic 3000 version that I find unsettling. First let’s review our version (I’ll group it by spacing out at the pauses).

ABCDEFG HIJK LMNOP QRS TUV WX YandZ
Now I know my ABC’s Won’t you sing along with me?

RIGHT? That’s how it’s supposed to be, right? Well apparently, we don’t want the kids to learn English too well so we chop out 80% of the English bit at the end(yes, I actually did the math) and also split up the “LMNOP” bit cause otherwise it’s just TOO DAMN FAST!!!

We end up with this disjointed silliness:

The first time I went to an Elementary school (2nd grade) they said, “Let’s sing the ABC song.” “Great!” I said and proceeded to sing the hallowed version passed down with pride and reverence from the time of our noble ancestors. When we got to the LMNOP bit and then the English at the end, the teacher looked at me as though I had just dissected a live puppy in front of the children. A look I returned after she and the children showed me the “right” way to do it. Ridiculous. 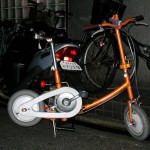 Isn’t this bike sweet!? Looks like something out of Back to the Future II. I must have one.

You know how some people have little speech habits that they use constantly without knowing about it? Kinda like how in 5th grade I used to always start EVERY sentence with “Well, anyway….” which almost resulted in Matt Schwab kicking my teeth in just to make me stop for 5 minutes (ahhh, good times). Well, kids still notice these things and they still make fun of the people who do them.

Yesterday in class I noticed that a kid in class was keeping track on his desk of how many times in one period Yoshizumi-sensei had said “desu-ne” (which is like the Japanese equivalent of ‘Mmmkay?’). That morning’s data sample resulted in 294 utterances in one period. With this week’s shortened 45 minute periods that averages just over once every ten seconds!! That could get a little annoying indeed.

I left the kid with Matt Schwab’s contact info if the need should arise.

Me: (while jingling my keys) “What’s in my pocket?”

Okay, that’s it for now. See you in a month with new stories and a new look. Toodles.