A Smattering of Culinary Disaster 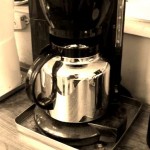 It is a sad day today, for the 3rd Year teachers’ Coffee machine has died. I’ve been in a state of panic for most of the day, not really sure what to do without my trusty caffeine intake. This comes at a particularly inconvenient time since there appears to be a staff meeting after classes this afternoon and then a section meeting after that. I have trouble staying awake for thosewith the aid of caffeine, much less going through withdrawals. Oh God, noow thse shakessz are steartingg..

Random Thought: I just realized today that I really miss wheat bread. You just can’t find it here most of the time. That’s not really saying much though since most of the time you can even find bread that isn’t cut less than a half-inch per slice(!!). I guess no one makes sandwiches at home in Japan, just Bigass Toast™.

In other culinary news, it has come to my attention that I should never be allowed to cook…. ever. The dinner I cooked for CuteRomanianGirl was 68% disaster. The meatloaf-type thing was all right, though it looked just about disgusting and the soup was almost tasty except that it tasted far too garlicy. Strange since I put in EXACTLY as much as the recipe called for. 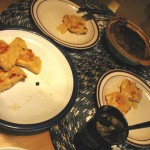 That wasn’t the only recipe that betrayed me though. The family pierogi recipe, handed down for generations since time immemorial, given me by my fair Mother herself… was of NO USE TO ME AT ALL!! I could NOT get these damn things to work at all. I double and triple checked the recipe to make sure I hadn’t forgotten something, or done a step out of order but there was nothing. It just didn’t work. What came out were these hard, dry, goofy looking things that would have made me want to gag myself had they not already been doing such a great job of that for me. 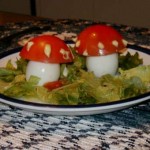 The coolest thing, and the only dish to go off without a hitch, was the salad, in which, on a tasty bed of crispy lettuce, I used a couple of hard-boiled eggs and the tops of tomatoes to fashion little mushrooms, dotted with sweet mayonnaise. CuteRomanianGirl was very impressed and thought this was adorable. I should have stopped there while I was ahead and taken her out after the salad.

In the end she was remarkably merciful in sparing my feelings and we managed to have a very enjoyable evening despite the culinary horrors I had gone out of my way to make. It’s nice how good company can numb the palate, ain’t it?

Coffee, bread and a dinner-disaster; This turned out to be quite the food-related entry, didn’t it?