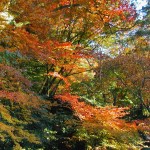 I went to Dazaifu with Nicole while she was here visiting for the week. What’s a Dazaifu you ask? Well, it’s an historic shrine that’s famous for, among other things, it’s beautiful fall colors. Kind of an abstract claim to fame, but man were they something!! I mean, of course pictures can’t do it justice, but what the hell, here’s one you can even use for a desktop background if you’re so inclined. 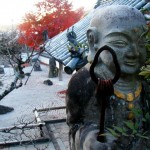 There was a cool little Zen garden not too far away so we checked that out and were greeted by this little stone monk guy just chillin out, sayin’ “Yo, wassup. I’m a stone monk guy.” I love this photo, by the way. Man I was on that day, as far as my photography skills go.

Now get this, the following pictures were taken when me and Nicole went clubbing. The amazing bit is that, since my camera died, and we couldn’t get the flash to work on hers, we had to end up taking photos on my cel phone’s camera. Yes, these are pictures taken with a cel phone!!! It just blows my mind!! Dammit, I love technology!!

Anyway, it’s late now, but I gots lots more to say this week. I’ll be back!