There’s an exciting world of Abacuses out there 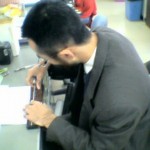 I’m sitting at my desk today studying Japanese when all of a sudden, Shimamura-sensei whips out, of all things, an abacus and starts flinging little beads this way and that as he calculated a student’s grade. We had this conversation:

When did you learn how to use an abacus?

When I was in elementary and junior high school. I got a high grade.

In this case, ‘grade’ means ‘dan’. (Dan is a ranking system often used in, but not limited to, martial arts)

There’s dan for using an abacus? I didn’t know that!

Yes, I have many trophies

(nods) But I can’t do it any more, my fingers won’t move fast enough.

I never would have guessed that there is such an exciting world of abacus’ (abacuses, abaci?) out there. 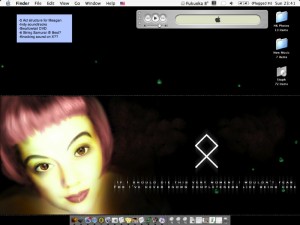 It’s been a while since I had a new desktop snap up (just the pic for today, I’m too lazy to type up the details sheet). This one centers on a desktop pic which has done wonders in complementing the black mood I’m in lately, featuring the delicious digifox. Those little green balls scattered across the screen are an application called Measles. The thing is those balls are constantly moving and bouncing off the edges of the screen, any open windows that are on the desktop, and even pull-down menus(!!). It sounds annoying but if you have the speed set really slow, it actually produces quite a calming effect as you go about your computing business. Quite a bit of fun, really.

Well, this weekend I’m taking off to visit Holly and company in my old “hometown” of Kumamoto. The excuse for the festivities is that it’s the first get-together of the new year, but the real reason is simply because the bars will be open anyway and we figure it’d just be kind of rude not to go and drink ourselves into a nice comfortable coma.

Besides, things have been less than stellar around here lately and a night of unfettered debauchery in a town as cool as Kumamoto sounds like just what the doctor ordered. At any rate Holly will be there which always makes for fun time. Besides being able to drink anyone in this country under the table, there’s just something about Holly’s character, you know? Whenever she shows up, photographs like this start to happen. I mean, really… what the fuq?