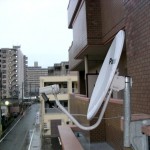 Yeah, I know I said I was gonna be back today but I’m on the tail end of my cold, thus I am tired. Any volition that is not otherwise consumed by this foul spectre of lethargy called “Cold” is swallowed up by the goodness of Star Trek: Voyager, Simpsons, Discovery Channel, Frasier and X-Files.

Yes folks, I finally got my satellite TV hooked up. Don’t get too excited, I’m not rolling that high over here. While cable TV does apparently exist in Japan, it’s not anywhere as widespread as broadcast satellite TV. There’s two big services here: SkyPerfecTV (what I have) and the other one (ready for this?) B.S. TV.

Yes, that’s what it’s called. I couldn’t make this stuff up if I tried.

Anyway, TV in English is good. Thus, no update today.