Ninjas are sneaky at EVERYTHING! 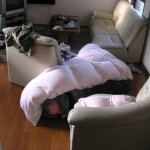 How did he not wake up from this?

So Fletcher’s dad is in town this week which is fun because the guy is sweet and has integrated into our crew in no-time flat.

Last night, me Fletch, Fletch’s Dad, Rory, Ben and Mihoko all went to yakitori. Suffice it to say by the time we got out of there, we had all had a few drinks, except for Rory who, in usual form, had a lot. Suffice it to say he wasn’t feeling optimistic about his odds of biking back to his flat on the other side of town in one piece, so he asked if he could crash on my couch. This morning I wake up and walk out of my room to see the scene in the picture appearing Stage Right. The resulting conversation consisted of:

Rory: That’s funny, I don’t remember going to sleep on the floor.

Me: That is funny, because I remember my couch being in one piece when I went to sleep .

I swear, there are days when this site just writes itself.

Okay, on with today’s Japanese Lesson. As many of you know, ninjas are sweet. What could possibly be cooler than a ninja, you ask? A female ninja, I answer.

It may be a little known fact, but female ninja kick such absurd amounts of ass, that there’s even a special word for them in Japanese: kunoichi .

Being the ninja fanboy I am, I’ve known about this for quite a while, BUT I only recently found out where this word comes from and why it describes female ninja. I will dispense this knowledge….. now .

As many of you know, there are three writing systems used in Japanese, hiragana, katakana and kanji. The first two are phonetic systems used to represent sounds, while the third is ideographic and representing ideas and meaning. Appropriately enough, all three of these systems are needed to decipher the concealed meaning of kunoichi (those sneaky ninja!).

Put those together and you get this:

See? I told you female ninja were sweet! Class dismissed.