A Trio of Tenses

Doh! Meant to post this last night, but that was before four, straight back-to-back episodes of Next Generation happened. I’m sure you understand.

So moving right along on What I’ve Been Doing.

Since Fletcher’s contract is coming to an end and he’s going to be going home soon, our good friend the Deputy Mayor of Fukuma thought it would be a good idea if we and a huge chunk of his staff all went to see a Japanese Major League Baseball game from private box seats. Weeeellll, all right. 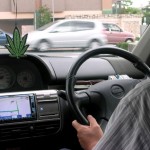 The funny thing that we weren’t ready for was when we met him in the parking lot, got into his car and were greeted by the marajuana leaf air freshner hanging from the rearview mirror. This guy is 50, he’s a Deputy Mayor and he’s got this thing plainly hanging in his car for all to see. Of course, I guarantee that he probably thinks it’s some kind of fragrant maple leaf or something, but still, it was bizarre. 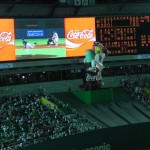 The box seats were sweet, the food and beer was free and the game was a lesson in pain for the home team. Why is it, every time I go to see the pissing Hawks, they get their asses handed to them with a note on top that says, “Good times, stay in touch”?? Worthless bastards. In the improbably event that the home team does actually hit a home run, this giant inflatable Hawk mascot appears and starts humping a giant inflatable bottle of Coke. No one there could adequately explain the reasoning of that to me.

I will definitely miss going to baseball games and having Fletcher around to translate what’s going on into simple, layman, non-baseball-freak terms so I can appreciate the subtleties of what’s going on. <sigh> 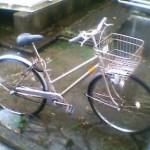 It was raining pretty badly all last week, but it hit REALLY hard all at once on Friday, coincidentally about 15 minutes before I was to go home. Bastard Rainy Season. I figured that it couldn’t possibly rain this hard for too long and it would eventually lighten up at least a little bit that it would be safe enough for me to ride my bike home. No such luck. It kept pouring like it was Vietnam for about an hour and a half before I finally said, ‘screw it’ and called a cab. On my way out, I saw my bike submerged in about 3 1/2 inches of water. Woe was me. 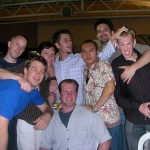 Last weekend was yet another JET sayonara party, this time at a Beer Garden. Now, I don’t recall if I’ve mentioned Japanese beer gardens before, but they’re a little different than what I knew of them back home, and a whole lot cooler. Actually, back home the only time I heard of beer gardens was at stadium sporting events where the alchohol has to be roped off into little areas. Not so in Japan.

No, a Japanese beer garden sports the following features:

2. They are usually all you can eat as well.

3. The food is so bad, it’s awesome. Damn near everything is fried and suits beer very well, which is good if you’re like me and are not too fond of beer to begin with. Hell, if you asked them to deep-fry a salad they’d probably oblige you.

And my personal favorite:

4. They are invariably located on the rooftops of tall buildings.

It’s soooo cool to just hang out and eat and drink yourself silly while watching the sun set over the city skyline. Just amazing, I never get sick of it.

So anyway, we had a JET party there and there was lots of beer, fried food, ill-timed photographs, southern girls telling me they’re bi and fried food. As JET’s are inheriently alcholoic (it’s impossible not to be when you’re job includes dealing with the Japanese education system), 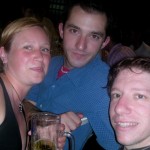 we adjourned when our time was up to yet another bar which had specially arranged for us to have a two-hour all you can drink deal. I spent most of this time schooling the entire world in fooseball tho, and I consider it time well spent. I never realized I was so unstoppable at this game. If you find yourself coming by Fukuoka anytime soon, drop me a line; we can meet at the Voodoo Lounge fooseball table and I’LL SCHOOL YOUR SORRY ASS TOO!!! WHAT? YOU SCARED?? BRING IT OOOOOONNN!!! MMUUUAAAAHHH!!! 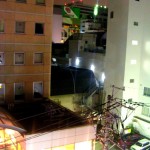 That party soon went south though, once the funky DJ stopped spinning and the crap-ass cover band started playing. Me, Fletch and Leslie (also a JET) decided it was time to move on so we went to this sweet little hip hop club called Pick’s and got some food and sat out on their cute little balcony and enjoyed the night air and neato urban view while stuffing our sorry faces with some pretty decent food. 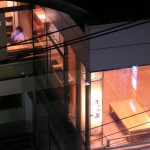 I also snapped this cool photo of some random guy in a restaurant or something across the street surfing the internet since his place was devoid of customers. I wasn’t able to accent the phone lines hanging in the foreground the way I would have like, so as to emphasize the ubiquitous nature of the wired world which this surfing soul inhabits, but I still kind of like the photo somehow anyway.

On Monday was Fletcher’s Soubetsukai (farewell party) from the Board of Education. Knowing that Fletcher is not quite as fond of raw fish cuisine as the next Japanese, reservations were made at an “Italian” restaurant here in Fukuma. Why the euphamistic quotes around Italian you ask? Because Japan has a habit of taking ethnic cuisine from around the world and raping it so that it is no longer recognizable in it’s original form, but instead has been ‘localized’ to better compliment the Japanese palate. This also makes it hard to find a decent Chinese or Mexican restaurant and why I would probably kill who you told me to, no questions asked, if it meant I could get some authentic fare from either of these fine nations. It’s not always a bad thing, often there’s a very interesting new taste involved from the merging of two culture’s palattes, but damn, what I wouldn’t give for some Kwang Chow’s right now. 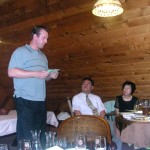 Anyway, the Italian place we went to was just such a place and the menu was very unique. Fortunately, it was tasty enough to forgive and since we weren’t paying for it in any case, I wasn’t going to start chiming in with my overly critical ethno-culinary criticisms lest I have to chip in. 😛 It was also nice because in addition to the all you can drink beer, which I try to avoid if possible, there was all you could drink wine. Now we’re talkin.

And if there’s any doubt in your mind that most middle-aged Japanese men are rampant chain smokers, I offer this Mountain o’ Cigarette Butts that I spied on the way out of the restaurant, a mere 1 1/2 hours after our arrival. Just…. gross, dude.

So that’s what I’ve been doing. On to…

Today is the last day of school. Summer Vacation is here. WOOO-HOOOO!!! I’m kinda fed up with shite in general yet again. I checked my archives and it was exactly around this time last year that I was feeling this despondent about the job and just ready to get away and refresh the ol’ batteries. I guess I’ve discovered another basic life-truth in the cycle of school enthusiasm. I remember as a student being sick of school before summer vacation and now I see from my co-workers, in another country no less, that the teachers get the same way. Summer Vacation is just one of those universal soul refreshers that all living beings are innately tuned into. Cool.

What I’m going to be doing.

It’s also been easy to keep my head up near the end knowing what’s in store for me this next month. Namely that I’m going to live in Kyoto and go to an intensive Japanese language school for a FREAKING MONTH BABY!!! Ahhhhh, it’s going to be soooooo nice. Kyoto is just, straight-up, the second-nicest city I’ve ever been in (it comes close to knowcking Portland out of the top spot, but not quite) and I get to spend a significant amount of time there, while being a student. I mean, the teaching thing is all right and all, but I really miss being in the student’s chair. It’ll be nice to revisit it for a while.

There is some bad news for Hair Flap readers tho, which is that during this month, I will only be online intermittently via expensive internet cafes, so I will be unable to update regularly until I get back on August 17. I feel bad, especially having had a month-long lull just recently, but I just can’t afford to get a wireless cel-card for my laptop at ¥8000/month when the contract minimum is six months.

I do plan on writing entries on a regular basis while there and will post them all at once when I get back, but until the 17th it’s gonna be quiet at www.hair-flap.com. It can’t be helped.