So I had fully intended to keep a running journal of my time in Kyoto, but it turns out that I’m a lethargic bastard so I only did it for my first night there. Without further adieu, here it is: 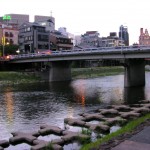 Rolled into Kyoto around 4:30pm. The dorm I’m staying at doesn’t open until tomorrow so in a fit of chronic laziness, I’ve decided to just go with what I know and stay at the infamous White Hotel, just across from the station. Despite how it sounds, it’s not a hotel aimed at foreigners; it is however a piece of 60’s cheese that hasn’t aged a day. I mean, you walk right in the place, see the cheeseball chandaliers and tiny bathrooms made of what seems to be one giant piece of vaccuum-molded, beige plastic and feel out of place because you’re not wearing your polyester suit. 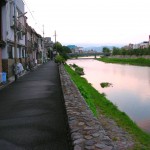 Since I had some spare time, I went and caught dinner in the base of Kyoto Tower. Now, you would think this might be cool, since restaurants in the base of sky-scraping structures tend to be kinda neat and classy, i.e. the Space Needle. Kyoto Tower’s restaurant is just sad though. This is another one of those places, like White Hotel, that you can tell was at the top of it’s class back when it came out, but now, it’s just sad and lame. It was more like a deserted high school cafeteria than a restaurant. At least the view was kickin. The Kyoto skyline at sunset can’t be ruined any amount of crap decor or sub-standard cooking. 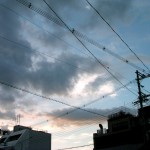 It was still pretty early, around 5:30 or so, and still plenty light out, so I decided to take a walk. Just a little look-see, nothing big. I promised myself I wasn’t going to take any pictures and wouldn’t even take my camera out of my bag.

Right, that lasted about 15 minutes. The quality of the light, the sky and the quaintness of the city at this time of day got the better of me, so I snapped a few of the pics you now see. 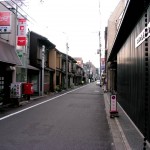 What the pictures don’t show however, is the silence. I mean, this is one of the biggest cities in Japan, and at 6pm, smack dab in the middle of it, I can’t hear a damn thing. Incredible.

So I’m just sitting at my desk, prepping photos for you, fair readers, when some old guy comes up to the ‘customer desk’ and asks for the Kyoikucho (Superintendant of Education). Now of course, you don’t get into the office of the Chief just by asking for him, so our kacho (department head) asks the guy if he can help him instead. The old guy just explodes and starts laying into our poor kacho, who immediately starts bowing and apologizing, for what, he has yet to hear.

The old guy then shouts over to my desk from the hallway, “Hey, foreigner!” It’s about five seconds before I actually turn my head because I’m debating in my head if I should get up, show him my name-tag and answer with, “See this? It’s my name-tag. ‘Foreigner’ isn’t written anywhere on it. ‘Scott’ however, is, being that it’s my name. Please don’t forget it.”Ultimately, I decide that it’s not my fight so I just turn and smile at the toothless old bastard (he had no front teeth, which just begs that he be made fun of).

He says, “This is what a Japanese argument sounds like. Understand, argument?”

I tell him I do then turn back to my computer as he again starts yelling at the top of his lungs at ol’ kacho. I’m thinking the whole time how different this is from back home. In the States, I can’t think of any situation where the people getting yelled at wouldn’t be telling this guy that until he starts talking like a civilized person he’s going to have to fuck off. I remembered my shite customer service job at Hollywood Video and how I’d tell people that if they didn’t calm down and stop yelling at me I was going to hang up on them. I smiled when I thought about when they didn’t and I went ahead and gave ’em a <ka-click> for their indiscretion. Ahhhhhhhhh, sweet justice. But kacho just kept bowing and apologizing and from what I could understand, the old guy still hadn’t gone into what he was so mad about, he was just taking the piss.

Now here’s the cool part. Our chief is a badass. Remember Pauly from Goodfellas? This guy is a dead ringer for him, so much so that we’ve even nicknamed him Pauly (but he doesn’t know, so don’t tell him, okay?). So, Pauly comes out with a smirk on his face and introduces himself. For some reason the old guy ignores him and starts yelling at kacho again. Pauly takes another step forward, motions to his office and says, “Hanase.” What I find interesting, and straight-up sweet-ass, is that this is the command form of the word ‘talk’ which turns it into an order. How cool is it that he comes out and instantly takes no shit from this guy and basically tells him to come in, sit down and state his beef. If that’s not Pauly-like, I don’t know what is.

The guy does it too, but not before telling the lady next to me to get his decrepit ass a glass of water.

After about an hour of alternating between yelling and laughing in Pauly’s office, he walks out it totally different clothes (he went in with trousers and a polo shirt and came out with a t-shirt and shorts, explain that one to me), and apologizes to everyone for yelling earlier. Then he introduces himself in broken English and tells me to ‘ganbatte’.