THIS is the Ring Trick 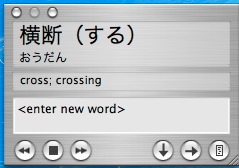 For all the Japanese language students out there, I wanted to mention a sweet little app for OS X called Kotoba. ‘Kotoba‘ of course means ‘words‘ or ‘speech‘ in Japanese and it’s appropriately named, since it’s meant to help you improve your vocabulary.

Basically, this application allows you to create word lists for easy review and study. Unlike other flashcard apps I’ve come across, this one is specifically designed for Japanese study, which really helps when it comes to handling kanji and their pronunciation. For each word, you can enter kanji, furigana (the text above a kanji that tells you how to pronounce it), the meaning AND any notes or usage examples you may want to include for that particular entry.

As if that weren’t enough, you can also press a “play” button which will automatically run through your word list, either in sequence or randomly, displaying the information sequentially (i.e. kanji, then furigana, then meaning and notes), at an interval that you specify. 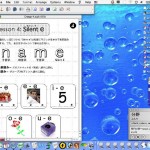 This thing is so cool. I have it set on my desktop, constantly cycling through my current list of study words. It’s such a convenient little study tool and it’s FREE!!

If you want to download it, head on over here(link removed, appears the dev is no longer around. -ed) and check it out, just beware that it is indeed for Mac OS X. Then again, if you’re using Windows, you have bigger problems to worry about than improving your Japanese vocabulary.

P.S. – I need to be honest with you folks; I enjoyed Catch Me If You Can a hell of a lot more than I ever expected to. As much as I usually enjoy Speilberg, a criticism I often hear and don’t disagree with, is that his films often have a colder, almost sterile feel to them. I don’t always find this a problem, and in cases like A.I. or even Minority Report it’s kind of fitting. But Catch Me If You Can had a surprisingly warm feeling to it (not sure how to describe it otherwise) that I found extremely uncharacteristic of ol’ Steven, and it was a pleasant surprise. There were nice moments of focus on the characters or situations that really brought out the essence of the moment and just put a grin on my face.

This is all without even mentioning that basically everyone in this movie hit their parts dead on. Tom Hanks; well duh, he’s always good, even if the movie itself sucks. Leonardo DiCaprio; it’s come to my attention that he’s an actor with a lot of potential that needs to be dragged out of him and smacked upside its head a few times like the little bitch it is, before it’s realized. This was definitely not done in Titanic and his character sucked. It wasin this movie, and I was as surprised as anyone to hear myself saying that he was actually pretty damn good. Christopher Walken; Fantastic. Just Fantastic. He’s Walken, what the hell else do you expect?

I can’t really say too much more without rampant spoilers, but let’s just say that I and the three people I’ve watched it with, have all loved this movie, so it might, just might, be something you’d want to check out.

P.P.P.S. – The new F-Zero game for GameCube is the fastest, most beautiful racing game ever created. After 30 minutes of playing it, the world looks like it’s moving in slow motion. You should definitely buy it. You needthis game like you need air. That is all.