Tradition in the Age of Dance Dance Revolution 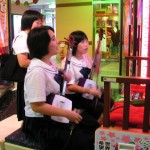 Okay, my insides are feeling much better today than they were yesterday.

Now I like Dance Dance Revolution as much as the next person, but I think these Bemani (short for Beat Mania, the rhythm-based genre of video games made by Konami) games are getting a little out of hand. I liked the dancing one, so much so that I have a dance mat for it at home on the ol’ Dreamcast. I could see the appeal of the drum and turntable versions, even though I sucked ample amounts of ass at both. I thought the guitar one was starting to get a little silly and the taiko drum one just didn’t seem to be too enjoyable. But the other day while strolling through Canal City, I saw the dumbest one to date; the shamisen bemani. Ever listened to shamisen music? Fast enough to make a challenging bemani video game it is not. Don’t let the smiles fool you, these girls are having a terrible time. 😛

In other news, unfortunately, my friend Nicole is far too motivated with her writing of novels to be bothered with what she now realizes are the horrific demands of a frequently updated blog-ish website. Thus the infamous Spaceport Nagaoka (Google’s cache of the site is here) is no more. You’re insights will be missed, Nicole. Any chance of seeing what you had written persist online in archive form?

Next weekend is the yearly Culture Festival here at school. The Culture Festival, or Bunkasai, is somewhat like the Taikusai (sports festival) All next week will be spent in preparation for the displays, activities and plays that will be going on for two days Friday and Saturday. I got the sly idea that it might be fun to take my video camera to school and show what they’re up to and maybe ask them some riveting journalistic questions.

That being said, is there anything you’d like to know or like to see asked? I’d love to actually quench some people’s curiosity about anything they might want to know. So if there’s anything you’ve always wondered about drop me a line and I’ll see what I can get covered next week. Anything goes (well, almost), so don’t restrict yourselves to only Culture Festival happenings.

Come on, people. Help me write my site. 😉