I whipped up a batch o’ desktops the other day that have a semi-Japan related theme, so I figured I might as well let ya have a look-see on the off-chance you don’t readResExcellence, where I submitted them a few weeks ago. They’re a series of photos I’ve taken centered around the preponderance of wires, antennae, etc that decorate(plague?) Japan all over the place. Check the mosaic below to see what’s included in the zip file(3.3MB). 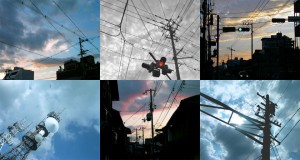 Man, it’s been a great couple a weekends around here lately. This past weekend, as I mentioned, I went to a fun Halloween party, which gave me a welcome excuse to wear my pinstripe zoot suit (I went as a gangster, dontyaknow), something I don’t get to do nearly as much as I’d like. 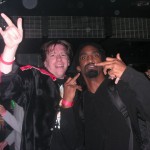 The weekend before that, I went to a local club called O/D, where the infamous DJ Towa Tei, formerly of Deee-Lite fame, was playing for the evening. Holy shit, can that guy spin!! Without a doubt, one of the best sets I’ve ever heard, period. Malik and Helen showed up as well and we all danced our arses directly off our bodies. I also ended up dancing quite a bit with an offensively cute Japanese girl, but more on that in a minute.

After Towa Tei finished his set, we all went upstairs to street level to get some fresh air and five minutes later, low and behold, out comes the man himself with his posse. So he’s talking to some people, signing some autographs and I stand up and tell Helen and Malik I’m gonna go get my picture taken with this dude. Some guy walking by at that moment though, says “He’s not taking pictures with guys.” I say, “Whaaaaat?” and, as drunk as I am (both on alcohol and good music) walk right over to Towa and say in Japanese “Yo, you’re not taking pictures with dudes?” In his trademark deadpan, he replies in a voice that sounds like he’s overdosing on Prozac, “Nah, it’s cool.” 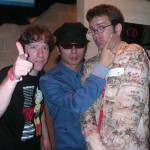 So one of his guys snatches the camera out of my hands, we pose and at the last second, this random gaijin guy that you see in the photo, jumps in the frame and we get our photo taken. So here I am with a photo of me, Towa and Random Fucknut here. Ah well, still cool.

So at this time, OCJG (Offensively Cute Japanese Girl) is chilling on the street getting her photo taken with Towa as well and eventually she and her cock-blocking guy friend join our little sidewalk crew. We had talked over a drink earlier in the club and exchanged emails and what-not, so as she was leaving to go home tells me to definitely mail her again. Schweeeeeeeet.

-A 2nd-year student’s reaction to learning that Shelly does, in fact, sell seashells down by the seashore. 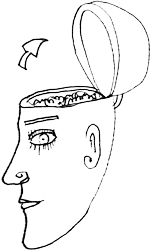 I went out with her this Saturday night (the night after the Halloween party for those having trouble with the timeline) and had an absolute blast. She’s fascinating, just fascinating. She’s got the whole tortured-soul-of-an-artist thing going on, and it suits her very well. She doodles a LOT and produced this portrait of me after our night together. I’m not sure if what she’s trying to say about me with this, but…… hm, yeah. Anyway, she’s cool. I hope I’ll be telling you more about her again soon.

Now it’s off to bed with me.