The Yakuza are Sweatin’ Me, Yo!

“Unlimited technology from the whole universe, and we cruise ’round in a Ford P.O.S.”
-Will Smith, Men In Black 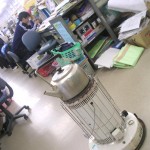 There’s a general image that Japan is tops when it comes to technology. Years and years of experience building VCRs that are so awesome that people can’t even fathom how to program them to record a show, has convinced the world that Japan is just one big episode of Star Trek, with cel-phones capable of taking and sending videos in everyone’s pocket, video/GPS car-navigation systems that are so smart and polite when they speak directions to you that you regret marrying your wife instead of your mode of transportation and cel-phones that have so many features, they can even give you a foot-massage and make you some pancakes.

Okay, I mentioned the cel-phone thing twice, but I can’t understate how cool the phones are getting over here. Sure, the ones in Hong Kong are waaay smaller, but all they’re good for is making phone calls really. Come on now. What are we, still living in caves here? These things can now take 3-megapixel pictures, and video, and send animated smilies on animated background wallpaper in emails, all on 260,000+ color LCD screens with resolutions so fine you need a magnifying glass to resolve individual pixels!! Using phones for phone calls…. yeesh. Silly peasants.

So anyway, there was a point I was intending to make and I’ll try and get to that now. The point being that aside from a few specific areas (the three standing out in my mind being, consumer electronics, public transportation and anything relating to convenience stores) the reality is that Japan is so far behind the technological times, it’s just depressing. Not exactly what you expected to hear, eh? (Or maybe it was, and you’re just super smart. Good for you, you’re very smart, now shut up.)

Case in point, in winter most homes are warmed by (ready for this?) kerosene heaters. Now pardon me for a moment while I get ornery, but what the FUCK!?!? Who in the hell, in any first-world nation, not even living way up in the backwood mountains, but in the middle of a massive metropolitan area, heats anything using kerosene much less a “modern” residence or place of business???

True, kerosene is very warm (when you burn it anyway; if you just drink it it’s not that warm at all) and the stream of heat that’s blasted out the front of these heaters is impressive, but it’s sad that this is the state of home climate-control in Japan. The reason that such drastic means are needed is almost as entertaining as it’s frustrating solution; buildings are generally not insulated.

Go on, read it again. You weren’t mistaken, that’s actually as stupid as it sounds.

After thousands of years of accumulating knowledge through trial and error as well as good sound reasoning, one of the easiest ways humans have learned how to keep temperatures stable within manmade structures is blatantly ignored to the point that it’s institutional!! I have some friends in Kumamoto that live in a brand new (like built within the last five years) apartment building and the walls are about 2 inches thick. Needless to say, there’s nothing keeping the place warm but some electrical wiring, thus their place is FREEZING in the winter unless there’s a stove somewhere in the place cranking out heat and that oh-so-homey kerosene smell. Electric heaters are available as well these days, but they eat up so much power that they’re hardly economical.

The ring of corruption that brings all this about boggles the mind. Most home construction companies are controlled by the yakuza, or at least enough of them are so that they influence the industry to a ridiculous amount. They’re the ones that dictate, more or less, how homes are built and they dictate that they be built to be cold and/or hot; the opposite of whatever you’d like it to be inside, in any case. This next part is slight conjecture on my part, based in part on anecdotal evidence. So why would the yakuza build craps homes like this instead of just profiting off better-made homes that used more materials that they could be charging for? I’ve heard more than one source tell me that it’s because they receive generous ‘incentives’ from corrupt officials in charge of power (be it kerosene or electricity, probably both) to make it so that homes are so inefficient that they’re always in need of being heated up or cooled down so their respective industries continue to rake it in.

During one of my many trips to Starbucks while in Kyoto this summer, I spoke with a fellow foreigner who was doing grad work at Kyoto University and he told me of his colleague’s tribulations when he eventually married a nice Japanese gal and they decided to build their own home in the hills outside town. Since they knew that a Japanese house built by local gangste…er, contractors would be the habitational equivalent of living in a paper towel, they got a foreign designer to draw up the plans and imported all their materials, including real, live insulation for their greater-than-two-inch-thick walls. Suffice it to say, the local Yakuza didn’t think that was as clever of an idea as they did and harassed and threatened him the hell out of this guy to call it off and let them build the thing and would even drive up to the house while it was being built and hang around all day, just off the property, shooting menacing looks to the construction workers who had the balls to build a house that didn’t suck. 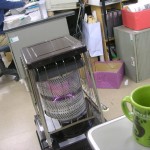 Yes, friends, this is (a small sampling of) the elaborate web of immoral treachery that surrounds modern homebuilding in the land o’ th’ risin’ sun. Why do I bring all this up? Because schools are built to be shit as well, the difference being that apparently kids aren’t worth the tax dollars to keep warm, so the uninsulated classrooms are cold as hell, hence when in class I’m cold as hell. Then I get to come back to the only room in the school kept warm by honkin’-huge kerosene space heaters, which I suspect are actually decommissioned Apollo booster rockets, one of which is about two fucking feet from my goddamn desk!! Only poetry could explain how much I’m actually sweating right now as I’m typing this, but since my poetry sucks, I’ll spare you the pain of reading any.

Yes, my life is just one big, tragic carnival of discomfort… and that’s just something that should be written about. Poor me. Even my cel phone is so old that it doesn’t have a built-in space heater like the new models. 🙁

PS – If you’ve ever wondered how Stephen Hawking would sound if he were a gangsta rapper that spun rhymes about physics, you really need to check out his alter-ego, M.C. Hawking.

“Fuck the damn Creationists, those bunch of dumbass bitches,
Every time I think of them my trigger-finger itches.”

Try as I might, I could NEVER had said it better myself. Woooooord.