New Phone, Part 1: My Phone is From the Future

I’ve been out of the States long enough now that it’s dangerous for me to criticize things. Of course, we all know I don’t “criticize” as much as I “openly lambast”, but still the fact remains that after three years a lot of things have surely changed back home that I have no idea about, making it folly for me to make direct comparisons to certain things. For example, I’m sure that by now, TV shows have risen above the mindless tripe they aspired to be when I was last there, the religious right has realized what complete fucking morons they all are and started issuing public retractions and apologies to all the people they’ve bullied, and everyone’s quality of life continues to rise on a daily basis thanks to the frugal, yet practical advice offered by Martha Stewart. I’m right, yeah? Please don’t tell me if I’m not.

That having been said, I’m pretty sure there’s at least one area that the US still deserves to be openly mocked about until it cries like the little sissy-mary it knows it is deep down inside. Yes, friends, cel phones. If you live in the US, I pity your sad, little brick that’s probably powered by gasoline or a hand crank or something. I hear that you’re finally getting color screens now, amazing! Welcome to the 21st Century only 5 years too late. I was looking online other day at various companies’ handset offerings and started weeping on my keyboard at the thought of having to come home in 5 months and have to use any of these novel incarnations of now-quaint technology. Sigh. 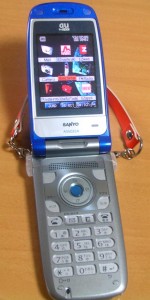 Okay, let’s give the hyperbole-setting on our phasers a rest for a moment. I bring all this up because I recently had to get a new phone due to a story too long and boring to tell here. Knowing that I was going to be leaving in about 6 months I didn’t go for the high-end Sony model I was drooling over, that I was sure doubled as cel phone and mini-AiBo. No I sufficed for a middle of the road beauty that just makes me happy to have the technolust I do. I thought those interested in this Daily Japanese Life Crap™ might be interested in the run down, so let’s just take a brief look at my baby. 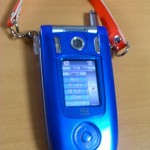 Okay, it’s blue. That’s pretty cool. Moving on, we find one of the coolest features of this phone, which was more-or-less the clincher for me choosing this model. Most phones these days have an out-facing screen that shows relevant info while the phone is closed. This phone’s screen is slightly larger than most and has a directional keypad underneath it. The allows me to access mail, internet and the 480×640 pixel camera, all without even having to open the damn thing up!!

Moving on, the screen on this thing is delicious. The resolution is stupidly high and and displays at 26,000 colors. Hoo-ahh! Have I mentioned that when including emoticons in emails (of which there’s well over a hundred), most of them are animated? Like when they show up in the mail, they’re animated. Wow, not even my computer email does that. 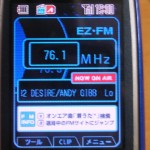 The feature most touted feature of this phone is, ready for this, the built-in FM radio. Yep, just plug in a pair of headphones and tune into whatever station your little heart desires. Of course, that by itself would just practical. Since this is Japan, we have to take practical and either move it a step towards “fuqing cool” or towards “omg, that’s ghey.” Fortunately Sanyo chose to go the “fuqing cool” route. So when your little java radio application is running on the phone screen, it goes online and downloads the playlist of whatever station you’re listening to and displays the title and artist of the current song!! No amount of hyperbole can make that any cooler than it already is. Granted, there’s usually an iPod in my pocket, so there’s not a lot of instances when I would use the radio in the phone, but I have had a few occasions to use it and it’s handy and works like a charm. What more can you ask for? 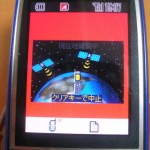 It would be hard to top such a cool FM Radio feature in a phone, but remember, this is Japan we’re talking about. “fuqing cool” or “omg, that’s ghey.” More of the former please!! Say you’re lost in a part of town you’ve never been to, or you’re visiting another town and are completely lost (as I managed to do once or twice in Kyoto this summer). You might have said in the past, “Damn, if only my cel phone had a GPS tracker in it.” 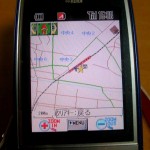 GPS tracker on my person at all times, how farking cool is that?? Not only does it tell you your current address and display it on a scrollable map, but you can find a destination on the map, or enter the address manually and it’ll give you door-to-door to directions, a la Mapquest. Have I mentioned this wasn’t the top-end phone?

So yeah, taking a look at these features, you can perhaps see why not only am I not only unexcited about returning to the sad state of cel tech in the US, I’m downright hostile about the very idea. C’mon, States!! You’ve got 5 months until I get back to sort it out so I don’t go on a rampage! I know you can do it!! U – S – A!! U – S – A!!