While we’re on the subject of my phone, let’s keep the momentum going. (Man, thank god for digital cameras because if there were no photos you wouldn’t believe a word I’m about to tell you and you know it. Neither would I.) Along with the phone itself, I got a bag of miscellaneous promotional goodies, all clad in au‘s trademark, eye-searing orange. It starts with practical items you’d expect then quickly veers into the realm of the surreal. 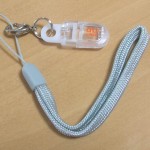 First thing I pulled out was a cool little phone strap. Fair enough, it’s useful and cool. For the life of me, I cannot fathom why phones the US haven’t picked up on the idea that it’s useful to have a little hole on the phone so you can thread a strap through it. It just makes so much sense. Reach down and grab the strap that’s hanging or poking out of your pocket and out comes your phone. Why NOT?? It makes no sense not to have it!! Yeah, cause there’s nothing I like better than having to stop and dig deep into my pocket to fish my phone out. Just LOVE looking like like a masturbating retard in public. Erg, the senselessness of it all is just making me angry, must move on.

Next up was a collapsable CD case that you can hang on something using a little loop at the top. I’m still not sure what this has to do with mobile telephony, but it’s pretty sweet nonetheless and is happily hanging on the wall next to my computer, keeping all my video game discs ready to be popped in at a moment’s notice. Cool. 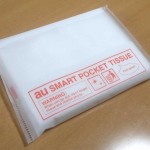 Then….I pulled out a packet of tissues. Hmmm? Granted, Japan has an obsession with tissue packets since many public restrooms are not equipped with paper towels and people in crowded areas on the street pass them out as a form of advertising, but I didn’t quite get the connection to why I was getting them with my phone. Advertising doesn’t make much sense since I already bought the thing. Hmmmm, maybe it was just to advise me that when I go out “Don’t forget tissue and mobile phone. Feel good!” 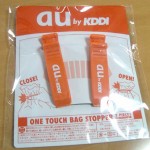 At this point, whenever I pulled something out of the bag I had one eyebrow raised in curiosity/anticipation/fear of what would come next. But it wasn’t enough. Honestly, what in the wide, wonderful world could have possibly prepared me for official au chip clips?? Wait…huh?? Chip clips…. cel phone… Snuffleupagus…. brain in flat spin…. Goose, eject!!

Thankfully, the chip clips had already broken my brain so that by the time I got to the bottom of the bag and pulled out a fucking au rubber ducky and some bubble bath I could no longer process the insanity. 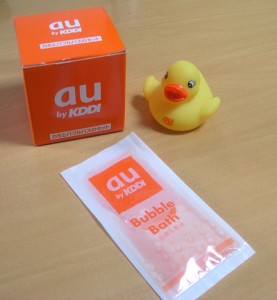 Thank you, Japan, for reminding me you’re there, even when I’m doing something as seemingly innocuous as buying a mobile phone. I’m off to therapy now, see ya later.