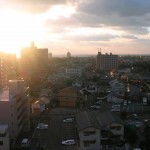 I’m slightly over three months out before it’s time to pack up and leave Japan and that’s been on my mind a lot lately…. i.e. I’ve been panicking!! 😛

Okay, it hasn’t been that bad, but I’ve been preoccupied with it, which has undoubtedly affected my attendance here on the site as of late. Long-time visitors have undoubtedly noticed the gradual change in focus in my writings over time, starting with the ‘tour-guide’ voice introducing the realities of Japanese culture before moving on to more sardonic observations on the pedantics of everyday life to finally doing whatever it is I’ve been doing lately (some have dubbed it, for lack of a better term, “nothing”).

I have to admit that I’ve kind of gotten a little burned out on the role of cross-cultural ambassador. Looking back on it, I also think my failed relationship with OCJG (aka Offensively Cute Japanse Girl, aka Yui, aka You Heartless Wench I still have your Xbox and am holding it hostage until you getyerassoverhereandexplainyourfuckingsel…… oh, erm…people are reading this, aren’t they? Ahem, I beg your pardon) briefly affected my outlook on things. Since so much of her difficulty in the relationship seemed to be incompatibilities between cultures, I guess I kind of projected onto her a little; thus I felt that the failure in relationship with her somehow equated to a failure in my relationship with Japan. While I think there is some truth in the thought that this time around my time in Japan hasn’t been nearly as fulfilling as my first tour of duty during university, I’ve also come to think that it’s too far a stretch to say that OCJG is an avatar for the entire nation of Japan in anything more than my head. Still, people are dumb, me included, so it took some time to get over the malaise that that particular line of thinking was resulting in.

I’m starting to come back to my senses little by little. True, I’ve been frustrated with some things about Japan, especially lately (more on some of that tomorrow ;), but since my time is growing short and I’ve been thinking more and more about what I’ll be doing once back in the States and plotting revenge career opportunities, I’ve really started to realize how little I want to go back. Barring friends and family and perhaps seeing movies as soon as they come out in the theater (stoopid 3 month wait for ROTK >:-( ), I miss precisely zeroabout life in the US. Sure, I’m ready for a vacation from Japan, but I’ve left this country only twice in the past three years. Who WOULDN”T be burnt out?? Truth is, everyone complains and vents about their lives wherever they happen to live; and if I had to chose to bitch about my life in the US or my life in Japan, I’m going to chose the latter any day of the week. Why? Check the archives? ^_-

So what I took an entire post to say is basically: I’ve been a pouty and ponderous little pussy punk lately so I’ve been blowing off the site. However, since I’m going to be leaving soon for good, I’m starting to remember why I like Japan (despite the bitching) and why I came here in the first place, so I should be back on track, Flap-wise, until the bitter end now.

Back tomorrow with some more of that wonderfully delightful bitching commentary that I do love so.