Those Inexorable Farewells and the Spaces They Leave Behind 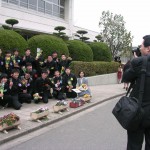 I think graduation day has a beef with me that it’s using to justify making my life a throbbing carnival of hell once a year. I sure don’t remember running over it’s dog or anything, but I’ve been kind of senile since my sophmore year of university so anything is possible I suppose.

Anyway, astute Flappers (my official term for regular Hair Flap readers) may remember that last year’s Graduation Day won top honors as my ‘Worst Day in Japan’,a title it still proudly holds. This year didn’t come close to stealing the title but it sure certainly put in a damn fine effort.

So while the ceremony itself wasn’t all that bad (a little sad saying bye to the kids that had been there as long as I had but still), I had the misfortune of finding out that a huge majority of the teachers I love were leaving.

First, I found out about Nakahara-sensei leaving. This sucks because in addition to being one of the nicest, kindest guys you’ll ever meet, he was a very progressive (i.e. not incompetent) English teacher who not only listened to me when I told him we should incorporate some kind of focus on phonics study, he gave me 10-15 minutes at the beginning of every class the entire year to teach it how I saw fit!! I mean, WOW. Those classes were the only time in this 3-year stint that my expectations of what I’d be doing on the JET Program were even close to being met. And now he’s gone to another school. Huzzah.

Nagai-sensei was another of those teachers who I would think, “Oh man, transfer anyone but him.” Guess what! Yes, Huzza indeed. 🙁 Though I get along with many of the teachers, Nagai-sensei was one of the only ones I considered to be a friend in any capacity. It’s also a loss for the school since this was his alma mater, he was always talking about how happy he was to be here and it felt like home and he felt such a strong connection with the students. Try telling that to the Ministry of Education though. Ha! Pack yer bags, buddy. 🙁 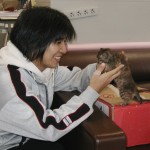 Then they went and just ruined everything by transferring my beloved Ishi-sensei. She had been my desk-neighbor back when I first arrived and is one of the most, purely good people I’ve ever met. Everyone has at least met the kind of person I’m trying to describe, where like even if you’re having the worst day of your working life, you hate the world and everyone sucks, she can say anything and you just kind of feel lighter and think “Well, maybe it’s not that bad.” That was Ishi-sensei. Even if I was having a good day, stopping to chat with her for a bit would pick me up. I mean, look at that photo for God’s sake! It’s so cute it sickens me! There’s no more of that in the teacher’s room now!! It’s all been replaced by lame. 🙁

So I’m sitting in the office with the nice office ladies bitching and moaning about how everyone cool is leaving. Then the Kyoto(Vice Principal) strolls in to make some copies. While those are running off he sees me and shakes my hand and says, “Well, thanks for a good three years, Scott. Take care in your last few months.” DOH!

Well, there goes the VP who had always done a fantastic job of looking out for me. Huzzah. True he never got around to hooking me up with the English bulletin board I repeatedly asked for, but I’ll never forget one week when I was kinda down for whatever reason and he made a point of asking me what was up and making sure that I knew that if I needed anything at all, not just work-related, I could always come to him.

I still managed to get out of it with a few of my other faves though, one being the adorable music teacher, Goya-sensei, and the other Mori-sensei, the recently graduated “new” English teacher. Yet, much like graduation last year, the pain was like a ninja, sneaking silently, making the shadows it’s home and holding patient, waiting for the right time to spring out of the tree and rip my jugular out…. through my ass.

So after being throughoughly crushed at losing half the teachers I get along with well at school, I decide to head over to the Town Office and chill out ofr the last few hours of work…. only to find that my supervisor, Shiraishi-san, the champion of Fukuma ALTs, was also being transferred. She was responsible for making my study trip to Kyoto this summer possible among other things and was ALWAYS making sure that we had everything we needed to get our jobs done and going way out of her way to get it for us if we didn’t have it.

She was probably more crushed to be leaving than I was to learn of it since she was trying to desperately to hold back tears. Good idea, people. Put someone into a job that theylove and are really good at, then yank them out and blast their spirits and morale into ashes for no reason. Just astounding logic there, you fucking pickle gangsters! >:-(

So after the one-two combo suckerpunch during work-hours, I went home and got changed for the farewell party for my school that evening. Everyone was trying to be happy, but I could tell that none of the teachers were happy about the transfers either. Usually whenever the staff got together it was like some kind of sorority slumber party with the laughing and fun that went on (sadly though, they were short on drunken college-girl kissing, which I’ve always lamented).

But that night I walked into the lobby of the restaurant where people were waiting for the banquet room and people were just sitting silently, watching the sun set into the ocean probably thinking about how it’s some kind of solemn metaphor for the ending of their jobs for no reason that’s good to them…. at least that’s what I was thinking. 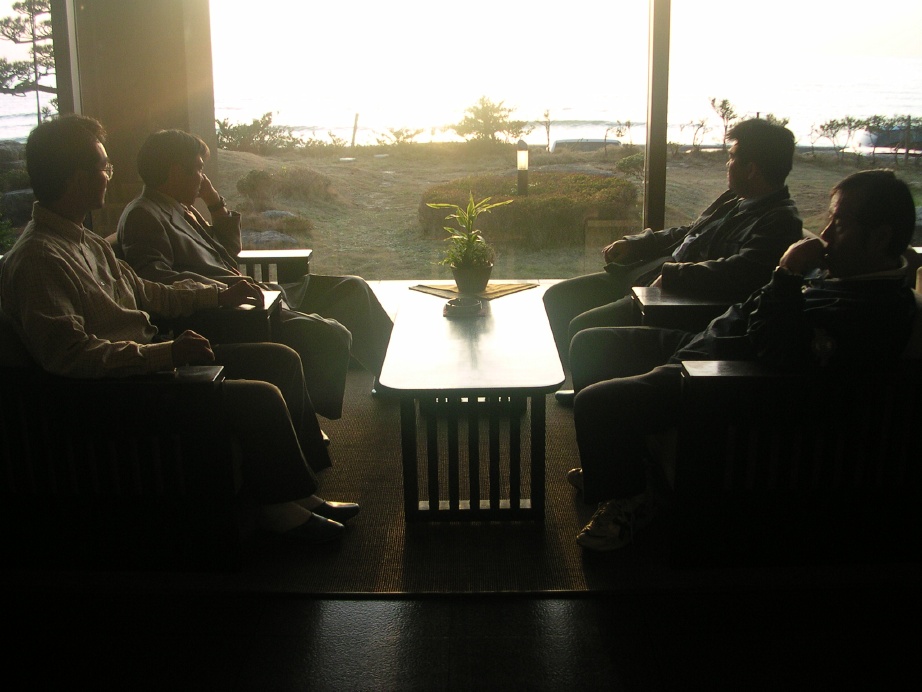 Then the banquet room opened and the farewall party began. The farewell party where I discovered, only upon their standing up and grabbing the mic to give their farewell speeches, that both Goya-sensei and Mori-sensei (the afore mentioned ‘salvaged’ Music and English teachers) were also being transferred and no one had thought to tell me. What a rude surprise. That was just not a nice way to find out about that sort of thing; ‘that sort of thing’ being the fact that officially every teacher that I had any sort of connection with is being told to pack up and move for no other reason than to ‘keep human relationships fresh’. I guess you could also argue that it does a wonderful job of keeping human relationships in perpetual shallowness. >:-(

So at the risk of sounding like a depressed, gothic vampire, my school is now populated with people who, perhaps if pressed, will acknowledge I exist, but will otherwise work to maintain a healthy professional distance between us. Thus workplace productivity is at an all time low, while workplace apathy is at an all time ______. FILL IN THE BLANK (Hint: inversely-proportional)

Other than that, I’m actually in a pretty good mood lately and really enjoying things. Odd dontyouthink?