On Obfuscation and Impermanence 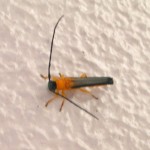 I took a look out my window the other day and saw this weird bug on my patio wall. Really cool looking, I have never seen it before. That kind of made me think, as I was in the middle of preparing stuff to send home, I had never seen that kind of bug before. I’ve been living here three years and it was the first time I’d seen it. It just kind of got me to thinking if this kind of bug has been here in Japan the whole time I’ve been here and it’s the first time I’ve seen it, just think of all the OTHER bugs out there that I haven’t seen yet, and may never see.

Okay, granted that point of that anecdote wasn’t all that veiled, I guess the Official Hair Flap Metaphorafizer™ is due for it’s 10k mile checkup. How about this one?

In the teacher’s room at school, there’s a sidedoor that goes down a little hallway, just for the teachers, where the Gents and Ladies lockers are. The other day while changing out of my sweaty bike gear, I noticed something I’d not noticed in three years. Down at the end of the line of lockers, was one labeled “Chad.” 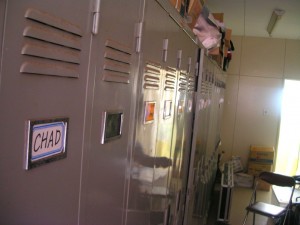 Chad was my predecessor, the first ALT ever in Fukuma. All his students have long since graduated Jr. High and are probably all in college (or flipping burgers) by now and all the teachers he worked with have certainly been transferred. Any influence he might have had has totally evaporated from Fukuma in any observable sense. Here I am looking at the chief remains of his experience, buried away in the back of the Higashi-Chu Men’s locker room.

Perhaps I should have been wondering if my experiences will amount to the same thing, if anyone will remember some of the things I did here, or if there will even be anyone here in another three years to remember that I worked here in Fukuma. Instead I found my thoughts drifting to how, for three years, all this time, only a few short feet away, this rat-fucking-bastard has had 4 hangers in his locker that I could have been using the entire time instead of my ONE goddamn hook!! AARGH, just think how well that could have dried out my sweaty shirts during the day to be nice and crispy dry by the time I don them for the ride home again in the afternoon. GRRRRRR.

So much for introspection. 😛