I’ll Admit It, I’m What Most Would Consider a Little Short for a Stormtrooper

Ah, here’s where I left my web site.

The past two months have been pretty busy, but I’m sure most people wouldn’t be interested in the gritty details. Therefore, I shall let slip only the most polished and lustrous details of my journey from the West to East coasts of this hufuckingmungous country o’ mine. A CliffsNotes® version, if you will, of the toilsome journey and my activities therein. 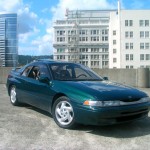 I purchased a car. Not just any car, mind you, but a conveyance that manages to be elegant without betraying it’s subtle eccentricity. It’s windows all but accost any who dare look on, demanding “Hey, how the f*$% do we roll down, eh??”

Behold, my Subaru SVX. Ahhhh, the glory of automobile ownership. Long had it been since I had sipped of it’s sweet, excess-of-100mph nectar. Vrrooooom!

(I just realized that my car is roughly the same color as the Flaming Buffalo. Coincidence? Or the Hands of Fate!?!?!) 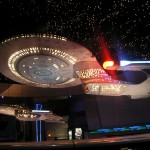 I stopped to meet my brother in Las Vegas. Vegas is all very well and nice, glitzy, loose a lot of money, have a lot of fun, drink when/wherever you want, blah blah blah. I’ll be honest with you, I went for the Star Trek Experience… and was not let down. It’s a Trek geek wet dream. I mean, when you walk in you’re greeted with these mammoth, illuminated models of two Enterprises (A and D for those with Trek-cred), Voyager and a Bird of Prey hanging from the ceiling. It was like 10 minutes before I actually entered the place cause I couldn’t take my eyes of these Holy Grails of modeling perfection.

The gift area is a mini-recreation of the DS9 promenade, and while the proportions are slightly miniaturized, the atmosphere was enough to keep me walking around with an ear to ear grin o’ geekiness the entire time. Quark’s bar is where I would spend every second in Vegas given the chance. Someone ripped the look, sounds and atmosphere directly off a TV screen and deposited it in the ground level of the Hilton.

I could go on about everything in the Trek Experience, but I wouldn’t want to ruin it for the rest of you. I’ll just end with saying that you are hereby advised to imbibe the bubbling, frothing fishbowl o’ drunkenness that is the Warp Core Breach. Nummers!

Actually I need to be honest, the police were fine for the first leg of my journey. i.e. I saw all of one across three and a half states. That was sweet. I’m sure more clocked me at various points, but didn’t feel the need to persecute someone who stringently applied the “free 10mph over the posted limit” rule that always seemed to me to be one of the great unwritten rules of the road. The problem was that cops east of New Mexico seem to think it’s some sort of good idea to enforce the speed limit. Wtf is that about? Ironically, I got pulled over during one of the few times that I was consciously not-speeding (meaning, I might have been over the limit, but it was definitely less than 10mph over), that a Texas mountie thought it would be fun to pull over the car with the funny windows.

Are you fucking kidding me? Seven pissing mph over and THAT warrants a stop? Oh, I should mention that the several hundred square miles surrounding the place I got stopped looked like this: 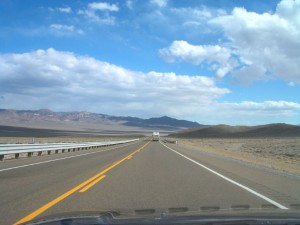 So I don’t think I’m overreacting that there are probably bigger fish to fry on roads that look like that, than those going a scant seven mph faster than the pretty signs say.

I damn near reflexively blurted, “HA! You shoulda seen me in Arizona when I was doing 115 in a 60, you’d have really loved me then!” Gratefully, my pie-hole was able to keep that gem under wraps and I got out of the affair with a warning. Having used up my Get Out of Jail Free card, however, I decided judicious use of the cruise control would be keeping me well within posted limits for the rest of the journey. Realize what that means; from Texas to the East Coast was within the speed limit. I wish that on no one who draws breath… ever.

One I hit South Carolina and my ultimate destination of Charleston however, my journey has hit a lake of molasses. I’ve found no job leads aside from the most humiliating and intolerable of jobs. It seems that stores aren’t even hiring for the holiday rushes, which is doubly annoying.

So, that’s where I’m at as of today. I’ve been spending every day from wakeup till bed-down hitting the papers/streets/phones etc trying to find something to supplement my soon-to-be exhausted money reserves, which hasn’t left much time for reflection and writing for the site. As I type this, I’m in a cafe waiting for lunch hour to finish so I can swing by a prospective job in photograph sales, which wouldn’t be too bad, I suppose. It’s still a far cry from the life of riley that I was living in Japan but at least it’s a field that I know a little about and actually have in interest in.

Despite this job-thing though, I think I’m about ready to start wrapping this baby up. I’ve had my re-orientation time, have some thoughts about everything looking back and forward and have no more need for institution of procrastination. Buckle them thar seatbelts, baby; Hair Flap is going into the final straightaway!