Bar Jake: An Evening With the Brother Blue 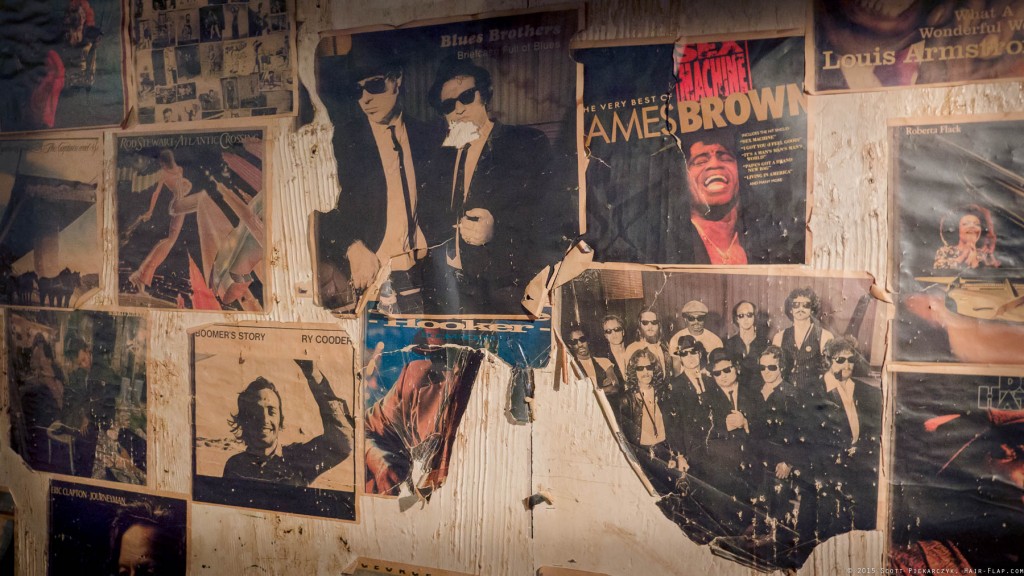 A while back while we were still in Tokyo, we met up with an old friend of Mary’s and headed into the night. After an Izakaya dinner in Shinjuku, we were searching for a place to have a drink. There’s certainly no shortage of places in Shinjuku to have a drink but none of us were familiar with any of them, so finding a decent place was going to be an absolute crapshoot.

After only a few minutes of strolling around though, we came across what appeared to be an instant winner. A Blues Brothers themed bar dubbed “Bar Jake”, after the eponymous Blues Brother himself on the 2nd floor of a building you’d miss in a heartbeat if you weren’t keeping your eyes open.

(Address is posted at the end of this article.) 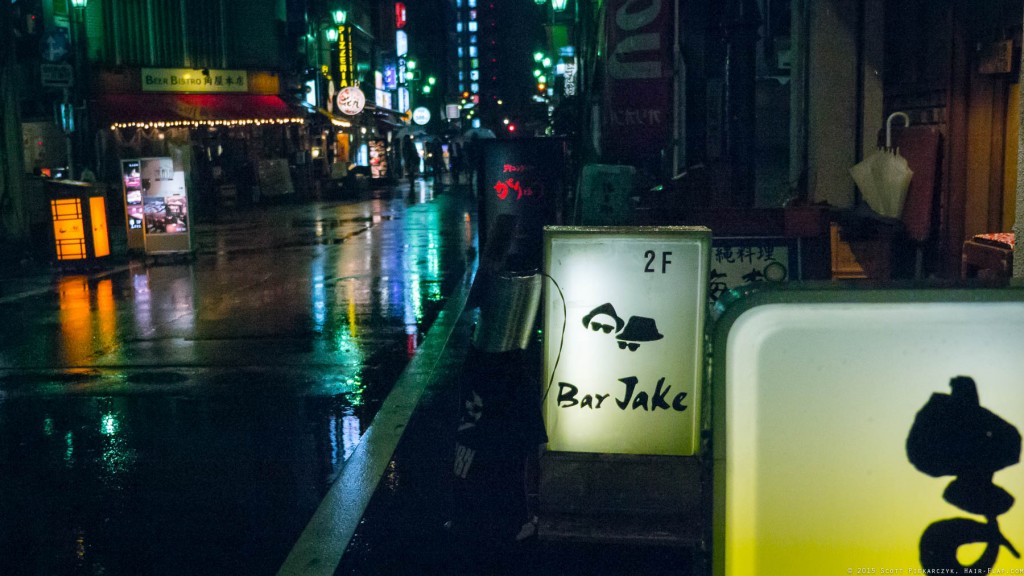 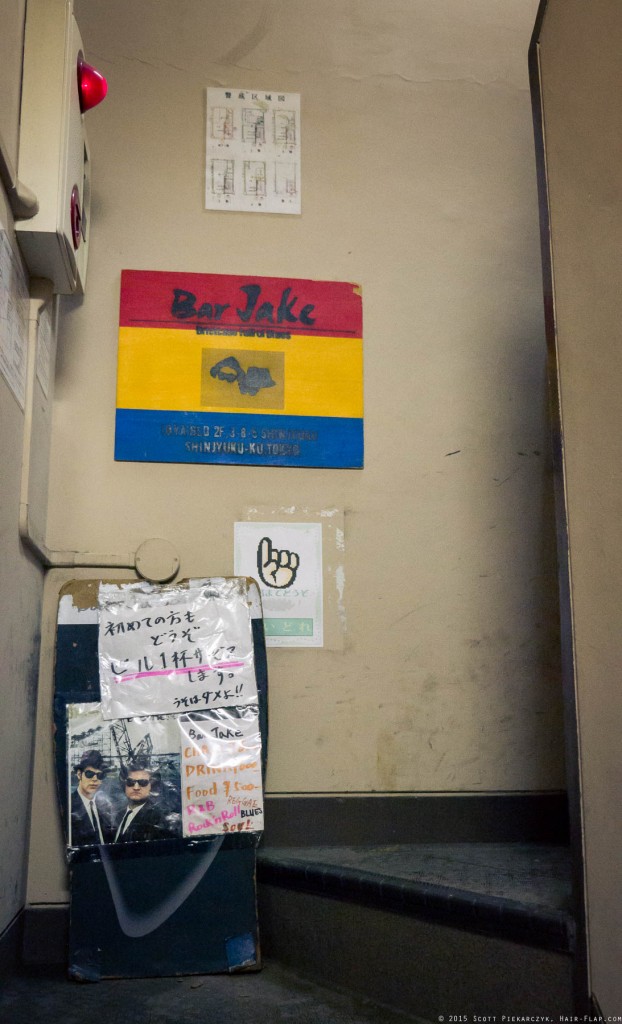 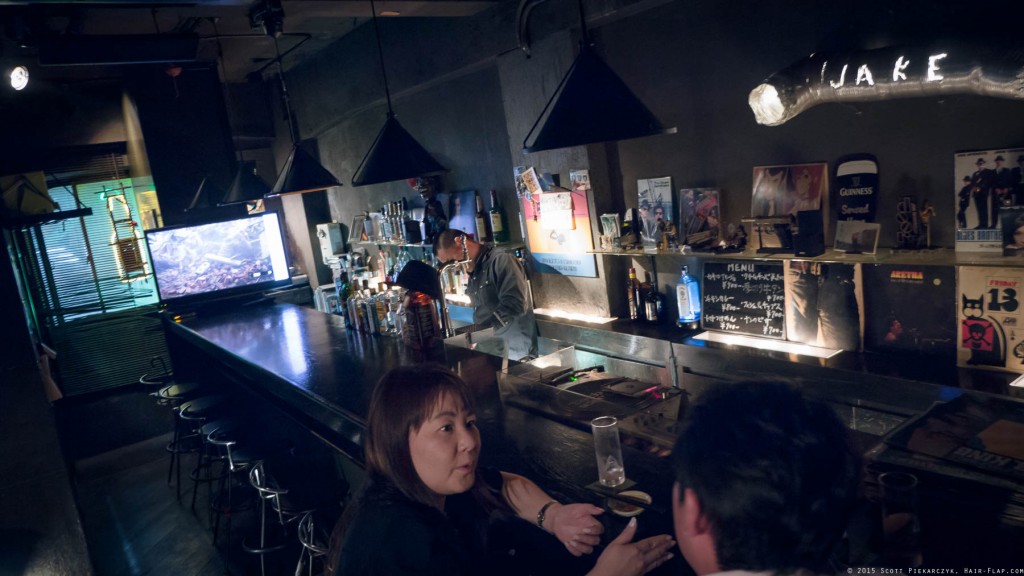 There’s a lot of places like Bar Jake in Japan; 2nd or 3rd floor, super-narrow and ‘tiny’ by many Western standards, maybe seating for 10-12 people. So while it may not be totally unique in it’s general milieu, it’s a friendly place that does what it sets out to do and does it very well. And it’s certainly the only place I’ve ever been in that feels like it could have run by the Blues Brothers themselves. 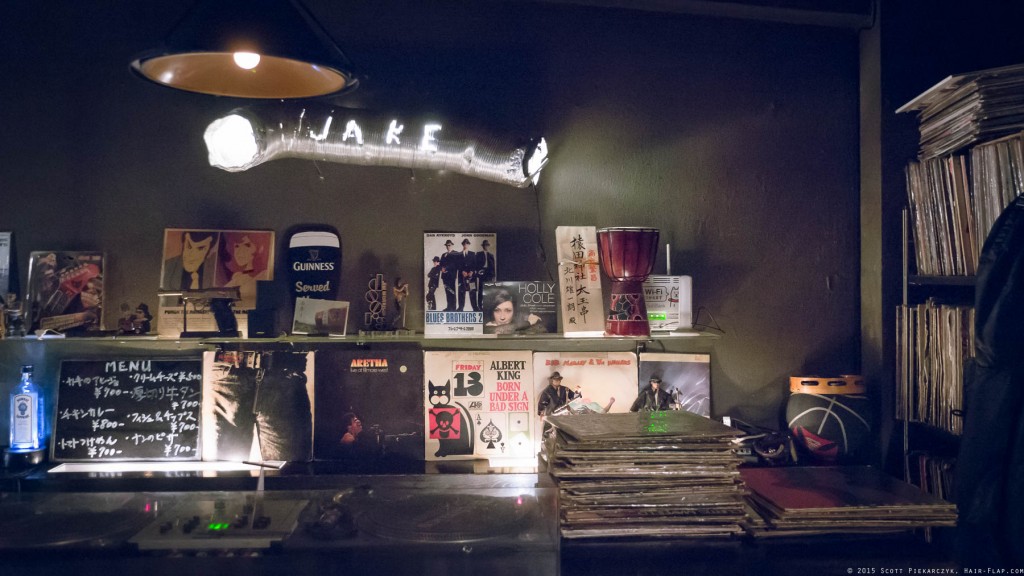 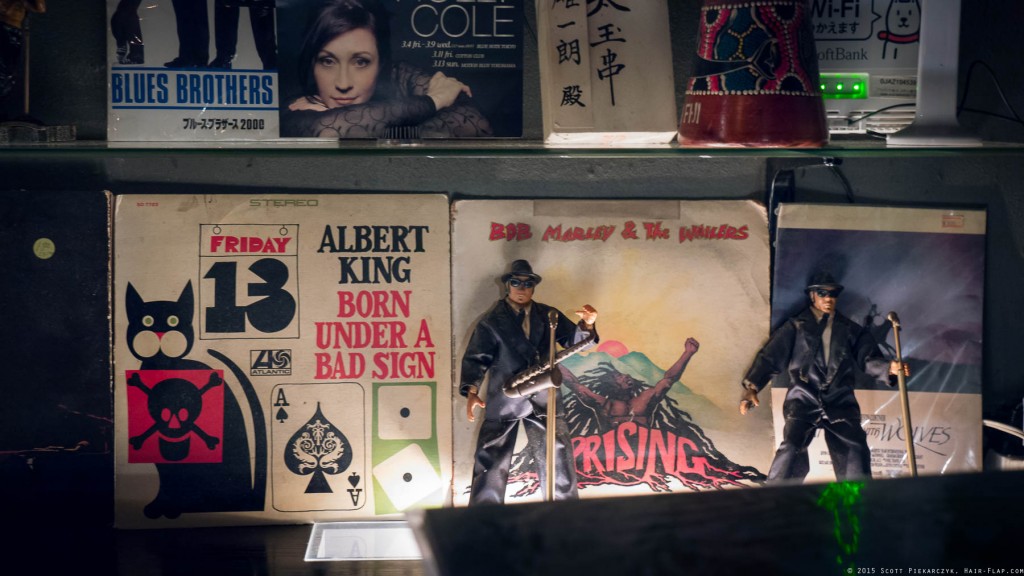 There’s not only a love of Jake and Elwood here (for example, you could spy dolls of their likeness behind the bar, and the only TV in the place had the movie playing on repeat), but there’s also a genuine love of jazz & blues, from the sizable library of CDs and Vinyl behind the bar, to the various musical equipment all over the place (it doesn’t seem like there’s room for a performance but maybe it’s a live house too?), and then there’s the various posters and album art wheatpasted to the wall. 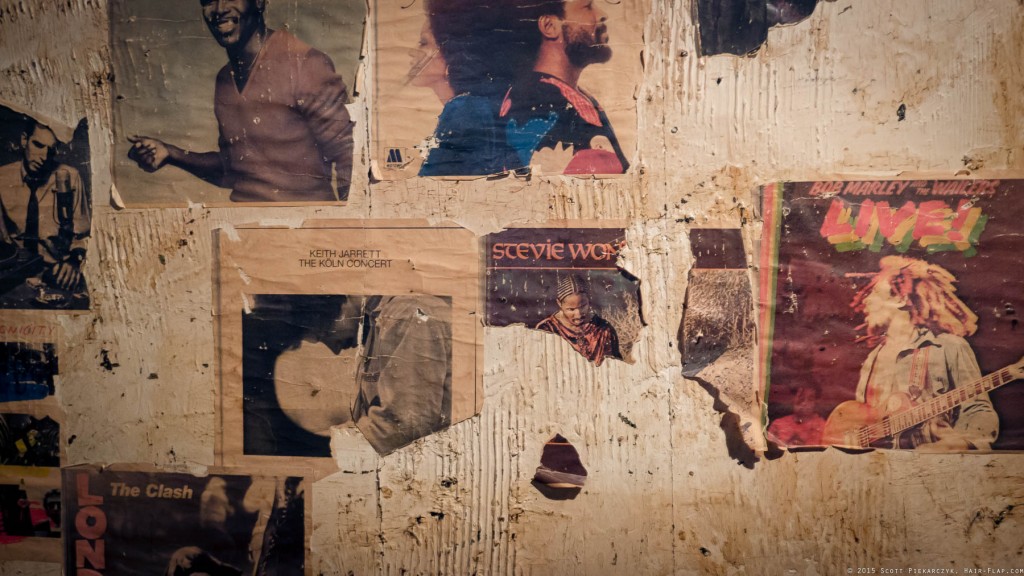 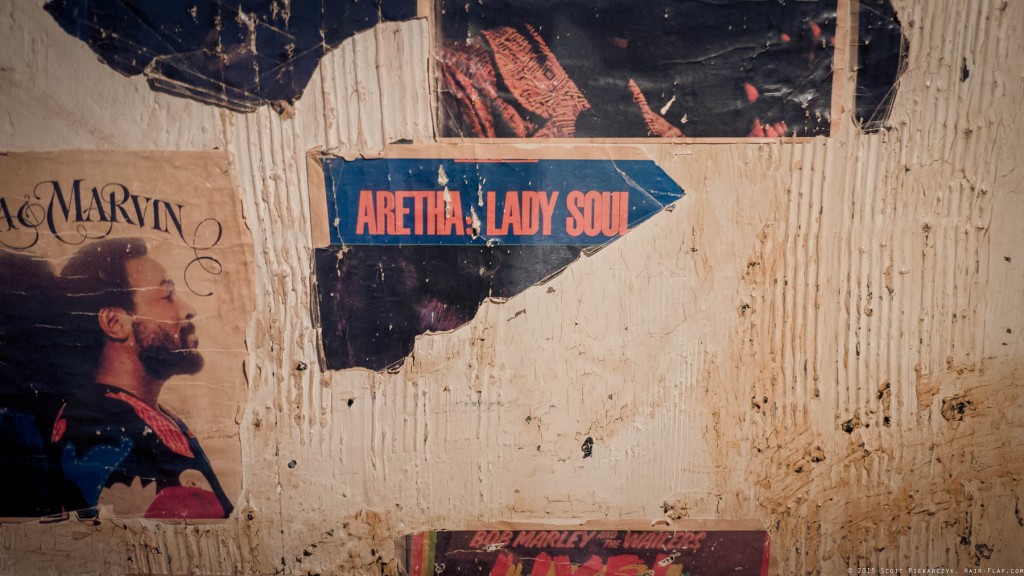 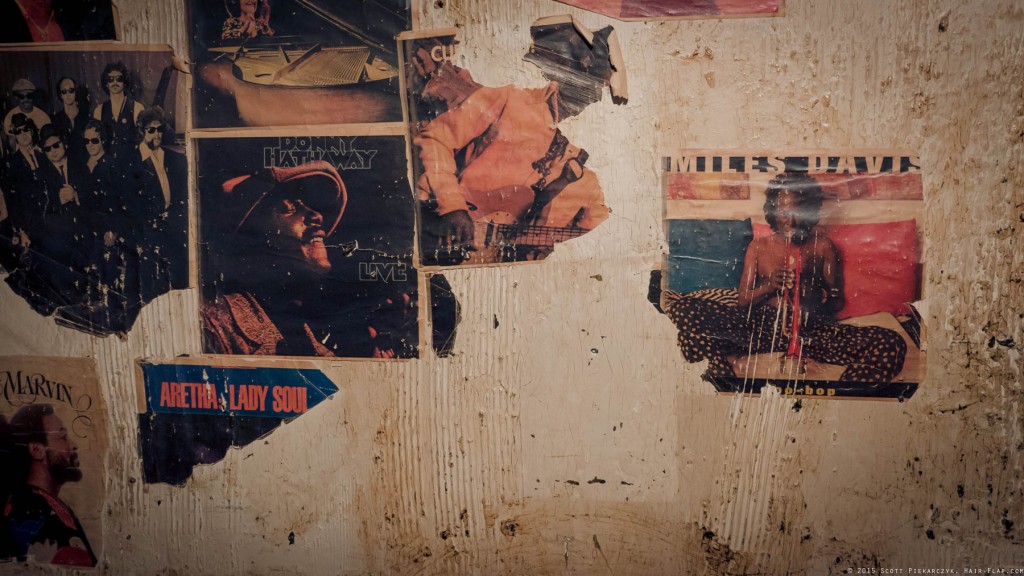 The ‘Master’ (what you call the head honcho in a place like this) was very welcoming and wow, he could make a Moscow Mule. It had a vigorous bite, which he told us was because he used Wilkinson Ginger Ale, a product of Asahi which makes lots of soft drinks and beer here in Japan. But yowza, this is more like homemade ginger ale or something because you feel the ginger when you drink it. It was one of the most memorable Moscow Mules I’ve ever had. This is all a long way of saying that the guy apparently takes a bit of pride in the ingredients he mixes in his drinks, so at the very least you’ll be in for a delicious evening here. 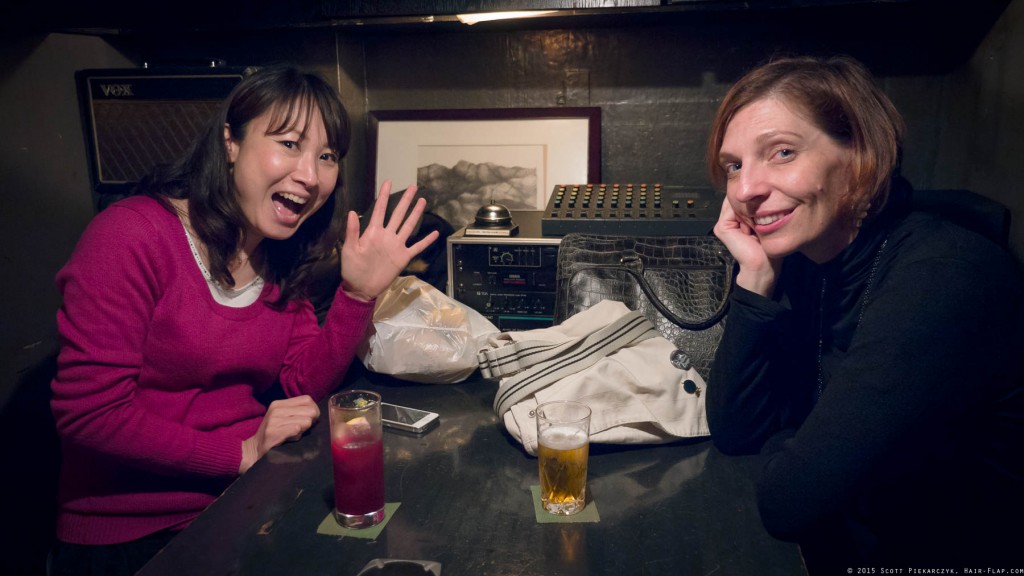 Bar Jake with Mary and Yuka. 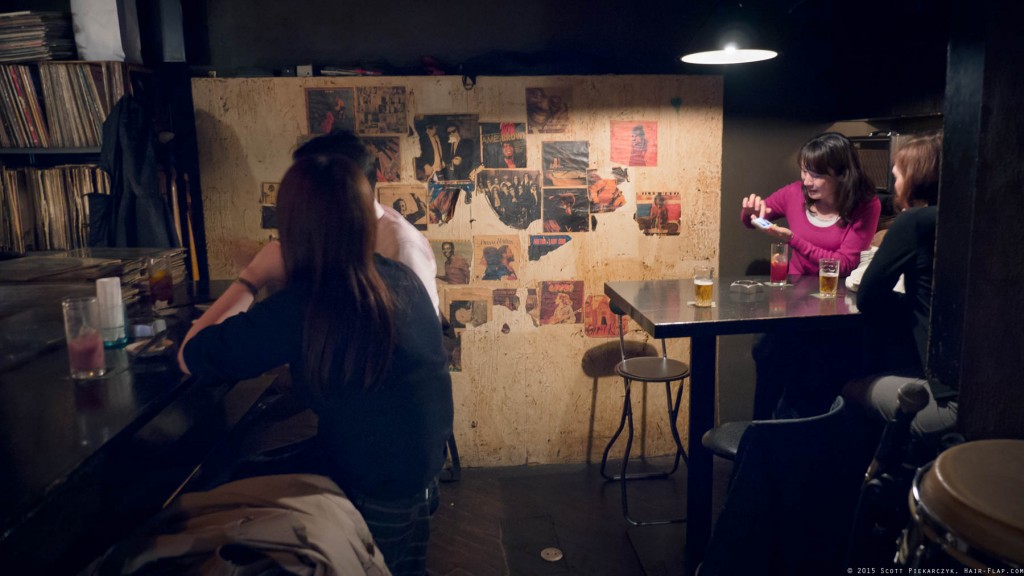 Long story short, if you’re in Shinjuku and need a place to pop in for a drink, track down Bar Jake. It’s a fun atmosphere in a cozy setting and at the very leastI can pretty much guarantee you’re going to have a fantastic drink. Consider yourself on a ‘mission from God.’