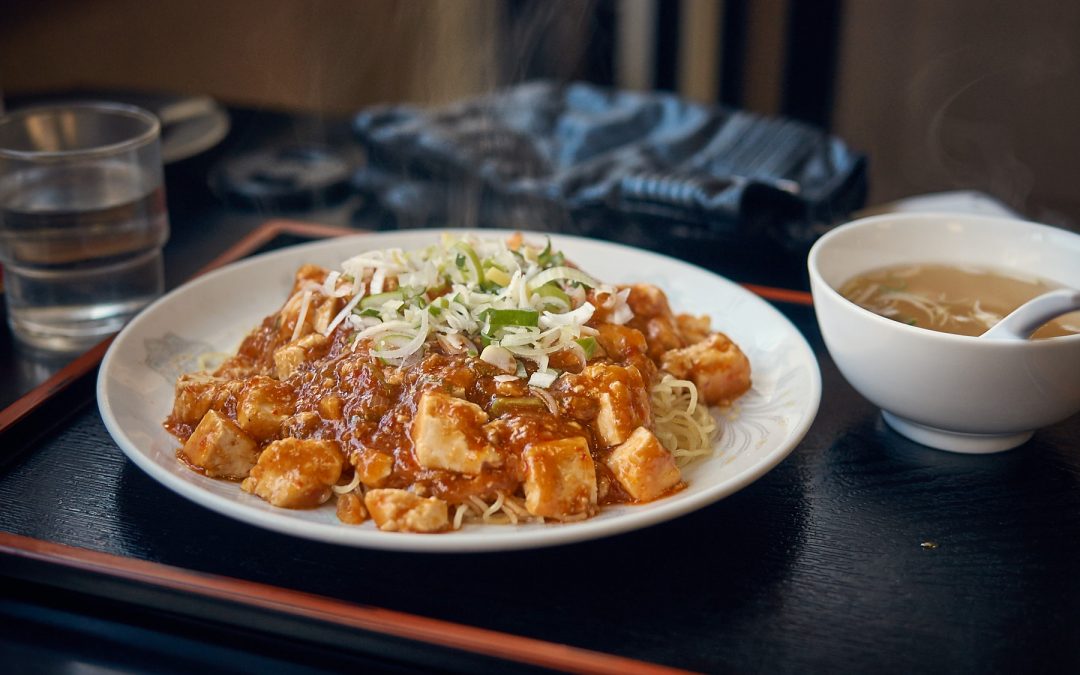 For the most part, every town in Japan has at least a couple quasi-official “signature foods” that they’re famous for. Sometimes it’s a genuine fame, such as Sendai’s Gyuutan (beef tongue) or Kumamoto’s Basashi (raw horse), either of which pretty much everyone I’ve met associates with those regions. Other times though, it’s pretty artificial, whether it’s engineered (by a chamber of commerce, for example) or accidental. Sendai’s “Marbo-Yakisoba” is a bit of both; accidental and engineered.

So, what is Marbo-Yakisoba? It’s a combination of yakisoba fried noodles (which are kind of a Japanese take on Chinese noodles) and a Chinese dish called Mapo Dofu, which usually consists of tofu-cubes in a kind of spicy chili sauce which is usually served alone, though sometimes with rice. 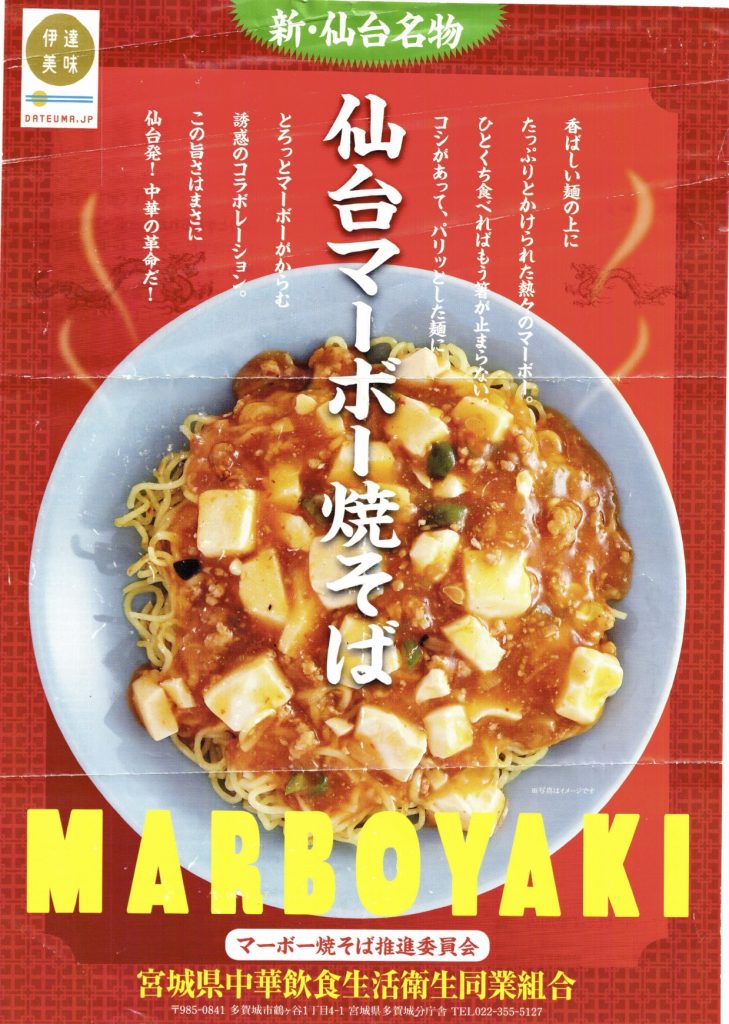 According to this nifty flier that I picked up in one of Sendai’s many Chinese restaurants (and whose historical accuracy is unimpeachable, I’m sure), sometime in the 70’s a few local spots started combining the two dishes and it caught on among the regular customers. It wasn’t something on the menu though so you had to know to ask for it.

It carried on like this until 2013, when one of the country’s many food programs highlighted the dish as one of the “Soul Foods of Sendai”. Soon after that, the Chinese restaurants in town all agreed to add their own interpretation of the dish to their menus so that Sendai could add another marketable meibutsu (famous item) to guidebooks everywhere, hopefully bolstering Sendai’s claim to fame while also bringing some tourist dollars into their shops. 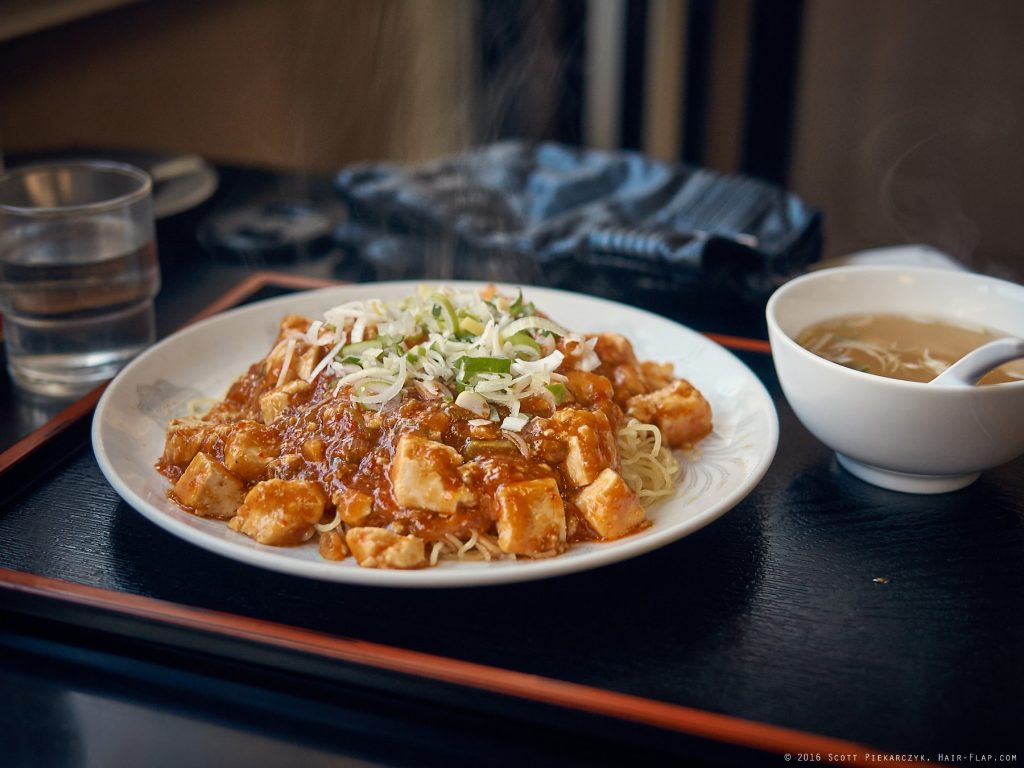 One of the restaurants that serves marbo-yakisoba was about half a block from our apartment and I was a semi-regular there. I tried this dish the first time without knowing anything about it and loved the hell out of it. Soul food, indeed! There was something about the texture of the noodles combined with the sauce that made it fun to eat and of course it was crazy delicious. I was raving about it to the shopkeepers and it was then that they informed me that I’d stumbled upon a Sendai speciality and they were pleased I liked it. 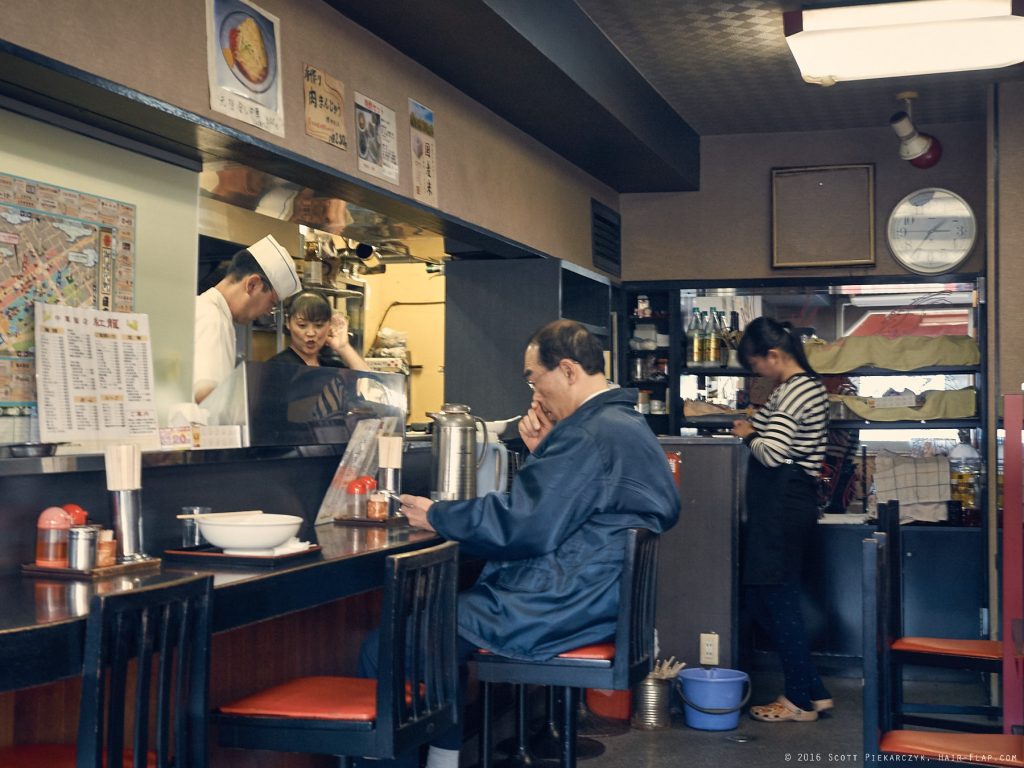 This became one of my favorite restaurants, partly because of the convenience and it’s delicious food, but also because of the people that operated it. They were always pleased to see me when I came in, and even on days when I was just walking or biking by they’d always have bright smiles and big waves as I passed. 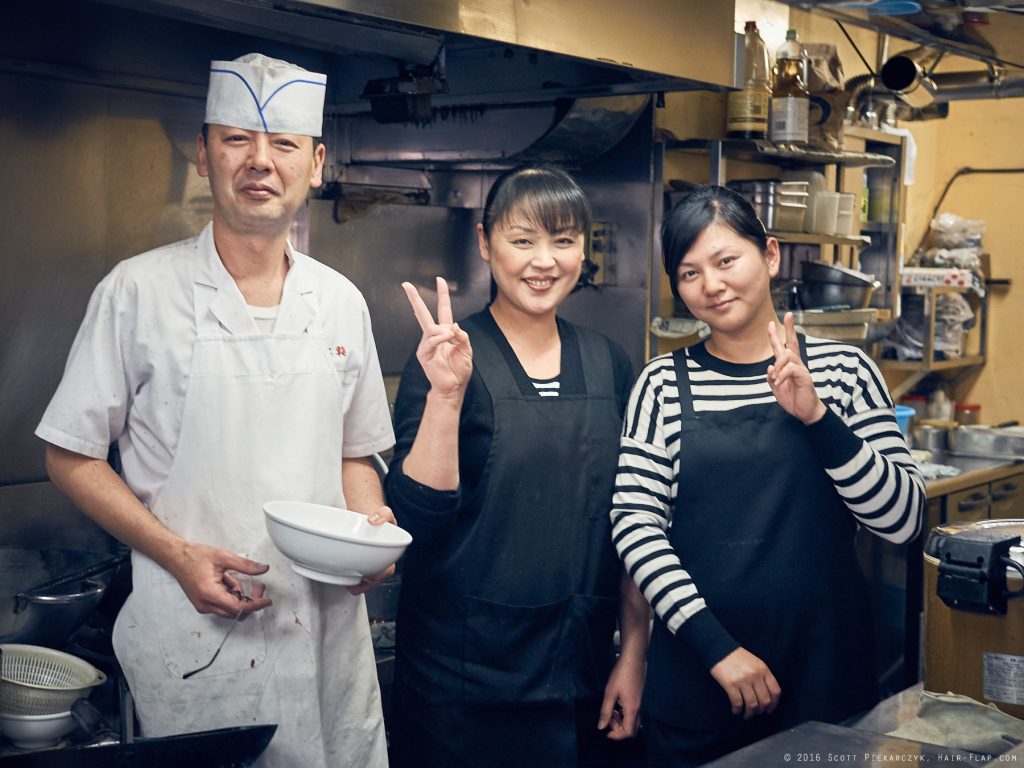 There’s plenty of places to try Marbo-Yakisoba in Sendai, as you can see from this list here, but if you don’t mind going slightly out of your way I’d recommend going to this place to stuff your face any day of the week.

Funnily enough I never did figure out how to pronounce the name of the place even though I knew the meaning of the kanji (紅龍、Red Dragon). If you’re going with Japanese pronunciation it would probably be “kouryu” but if they’re using a Chinese reading, your bet is as good as mine.

I’ve been keeping my eyes open but I still haven’t come across anywhere making Marbo-Yakisoba down here in Osaka yet. Certainly, Osaka has no shortage of it’s own delicious soul foods (which we’ll cover on another day) but on a cool, rainy day like today, my first thought was a steaming plate of accidental, Sendai yumminess. I do miss it so.