What to know what a hair flap is? Well, so do I!!
Right outside my apartment building is the dumbest store I’ve ever heard of. The store itself isn’t that dumb, it’s just a trendy hair salon that appears to do pretty good business. What’s dumb is that someone had the tragic inclination to name it Hair Flap!!

Living in Japan, it’s just inevitable that you’re going to run into all kinds of bizarre, offensive, amusing and sometimes downright confusing uses of the English language. There’s even an entire page on this site dedicated to showcasing some of the crap English that I come into contact with. 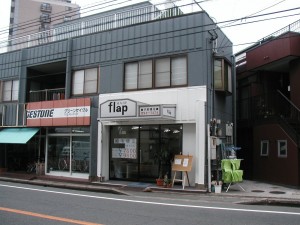 But my obsession with Hair Flap is special. The name itself is not really that shocking, and I’ve certainly heard more bizarre word combinations over here, but it’s just so damn silly-sounding to my ears. It’s not something that doubles me over in laughter, but makes me shake my head and giggle for about an hour at a time. It’s also pretty funny to hear Fletcher practice his Japanese by asking, “Hair Flap wa doko desu ka?”

Thus, I have decided to make this cute little barber shop (which, frighteningly, appears to be a chain here in Japan) the mascot for my site – without anyone who works there knowing about it, of course. It just kind of embodies a lot of what I find so interesting and humorous about Japan and why I never seem get sick of living here.