Woo-Hoo, the first update!!! I finally made it!! And as promised, there are actually pictures this time around. Not good pictures, mind you, but at least it’s something to look at. I don’t have a well structured topic to follow this time, so it’s going to be stream-of-thought-city for this update, kids.

As you’ll notice, there’s also a few new buttons thanks to some feedback from my dear Ma’ who suggested that it would be nice to have a way to get back to the Home page. I actually had it set up so that the Hair Flap picture at the top of every page would take you back to home, but upon closer examination that doesn’t seem to be a very intuitive way to do it. Jeez, has my experience with Apple taught me nothing!?!? I’m so ashamed. So there is now a home button, although the Hair Flap picture will continue to remain a link to the Home page so that those of you that actually managed to figure it out can continue to do it the ‘old fashioned’ way.

I added the Misc. button to house anything else I might want to share that doesn’t directly relate to Japan. Most people will probably find it dumb. Feel free to ignore it, or to print out a picture of it, tear it up, burn the pieces and throw the ashes into a river then hurl the river into space. Either way is fine with me.

Last thing to mention is that I had the bright idea of starting a mailing list to notify y’all when I actually get around to updating the page, since I’m too lame to do it on a regular basis. If you’re interested in joining the list, drop me a line or click the new link at the bottom of the page and I’ll add you to the list. C’mon, you know you want to. You want to be cool, right? Your friends will think you’re cool if you do it.

This weekend was insanely busy. It all started Friday when, immediately after school I had to bike back into town and meet, what seemed like, then entire Town Office staff and their families for…. are you ready for this….a jump rope competition. Each team had eight members from age 8 to 55, jumping a huge rope at the same time, trying to set a record for the most number of jumps before someone got tripped and died. As you can imagine, the carnage that resulted is hard to describe. Fletcher and I were at a loss as to how all these people could be taking this so seriously (and believe me, they were really getting into it), but at the same time it was kind of neat. I mean, how many city officials do you know of, that after 5pm, don their sweat suits and get down and dirty with some serious jump rope action?

Afterwards there was a speech followed by, as always, a lot of eating and drinking. There was also a soba(noodle)-eating competition that I got suckered into participating in. It might have been okay had they not been cold noodles soaked in green tea. The urge to vomit was only quelled by the fact that there were 80 people right in front of me, cheering me on. I figured it would probably disturb the ‘wa‘(group harmony) if I returned their gracious enthusiasm by yaking on them. 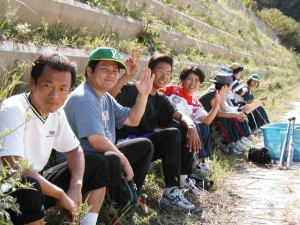 Everyone seemed to be having a really good time though, despite the fact that every time we got to bat we were shut down. Three up-Three down, every damn inning. Grrrrrrrrrr. But our teachers were laughing and cheering each other on way more than the other teams, so I guess we won the spirit competition. Yay.

The funniest moment, hands down, was when Sadasue-sensei got up to pitch and the bench started to cheer her on. Instead of saying things like, “Go for it!!” or “Hit a homer!!” all the other women started crying, “Kawaiiiiii!!!”(cute). By this point, they apparently had given up all hope of any display of athletic aptitude and instead opted to praise her for her stunning fashion sense and adorably feminine batting style.

As expected, she didn’t clobber any pitches into the bleachers. 😛