When I first started this page, I had mentioned that one of my main aims was to help answer the question of ‘why I want to live in Japan. Well, last weekend was a prime example.

I went to Kumamoto City, where I lived five years ago when I was on exchange as a college student, and hung out with a college friend. She teaches at an English school in the city, so she invited some of her students and friends along and we all went out for a night on the town. Eight of us ended up going to karaoke and singing and pissing the night away. 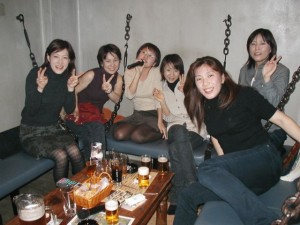 Why is this so great you ask? Because as the photographic evidence indicates, I was the only guy there!! Bwahahahahahahahahahahaha!!! (actually, since I’m taking the picture and am not actually in it, I guess it’s not great evidence, but trust me anyway)

This is why I came to Japan. 😉

BTW, everyone there just about lost their minds when I waxed old-school with MC Hammer’s U Can’t Touch This.

Last but not least, I need everyone’s input on a very important decision I’m about to make. For those of you who don’t know, from my Junior year in High School until a year and a half ago, I had a small braided rat-tail in the back of my hair. Sadly, I cut it off after many faithful years much to the delight of my dear father. Yes, he hated that thing with a passion and I suspect he even had a secret notebook full of nefarious plans to go about cutting it off when I was least suspecting it. Anyway, it’s been a year and a half and I’m thinking it’s time to annoy my father with another outrageous hairstyle choice. 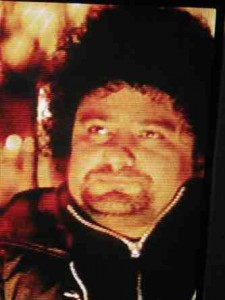 It has been unanimously decided among The Regulars, that my hair would be best fulfill it’s potential for coolness if it was fashioned into a small afro-perm reminiscent of the one sported by Kenny from Lock, Stock and Two Smoking Barrels. My friends have even gone so far as to decide that this is a noble enough initiative to chip in ¥1000 a piece to bring their plan to fruition.

While I don’t have anything to lose by doing so, and I’m probably going to do it anyway for the hell of it, I’m very curious what you all think about this. So drop me a line with a Yay or Nay.

See y’all with a new update next week. And of course, by ‘next week’ we all know by that I mean ‘next month.’ 😛