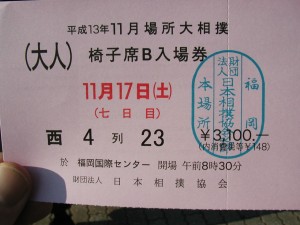 Don’t fool yourselves, there is no cohesive theme holding this update together, whatsoever. We’re talking this update has all the continuity of a fever-dream, baby. But it couldn’t be helped, I’ve just been a little too scatterbrained after the past few days.

This week has flat-out sucked. I’ve had Elementary school visits, a 2-Day, Mid-Year JET seminar, a Vice-Principal that was not informed by my Town Office that I had a 2-Day Mid-Year JET seminar and was thus wondering where the hell I was for two days, and to top it all off, I really want a cup of Hot Chocolate right now, but I’m at school so fat chance that’s going to happen.

On the bright side, I finally got my packages from the States, which means my apartment can now officially be christened The Dreamcastatorium. 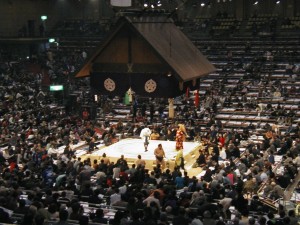 In other news, it has come to my attention that I am entertained by fat-men in jock-straps hugging each other. But I swear it’s not what you think. Or maybe it is, who knows. In any case, I’ve grown quite a fondness for that enigmatic bastion of Japanese culture, Sumo wrestling. I can’t explain it. I mean, last time I was in Japan, Sumo bored me to tears, and now I can watch it for four hours at a time and not even realize it.

Me and Fletcher took the opportunity to go to Day 8 of the Fukuoka Tournament the other day and it was pretty darn neat. And for those of you who have never been to a Sumo Match and are wondering – yes, they look as fat in real life as they do on TV.

Anyway, I only managed to snap off one pic before the batteries in my camera mysteriously died – despite the fact that said batteries were inserted into my camera only 40 F#%*ING MINUTES EARLIER!! I’ve contacted Fox Mulder regarding this inconvenient conundrum and am eagerly awaiting his findings. In the meantime, here is the sole picture of our Saturday outing to Fukuoka-bashyo (Yes, I realize that they’re not even wrestling in this photo. Shut up).