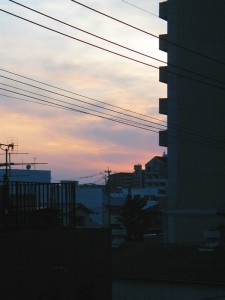 So I had a wonderful update planned, full of Cheerful Holiday….uh…Cheer, I guess, but then I went and got sick as hell on Thursday and have stayed that way straight through the weekend. I’m only just now starting to recover. It was so bad I even missed two days of work. I never miss work or school or anything due to “being sick.”

So how could I have been crippled for the better part of the week, you ask? I’ll tell you: THERE IS NO SYMPTOM RELIEF MEDICATION IN JAPAN!!! There isn’t a bottle of Ny-Quil….sweet, sweet Ny-Quil, to be found in the entire country because some damn idiot had the poor foresight to outlaw pseudoephedrine.

Now I don’t want to tell anyone how to run their country, but the dire state of citizens paralyzed by pseudoephedrine abuse is hardly at the top of Japan’s list o’ “S#*% We Gotta Fix.” They keep lamenting over how their economy is suffering so badly lately. You know why it’s suffering? Because everyone is too busy feeling like crap from the common cold that they can’t bother to think about spending money. Of course, Fletcher says there are other economic factors at work, but I’m holding fast to my own hypothesis.

In other news, I’m probably going to miss an update altogether next week since I have to send in my computer to get my DVD drive fixed. I don’t know what I did, but it ain’t working no more and I’ll be buggered if I have to go through winter break without being able to watch all the wonderful movies I have on DVD.