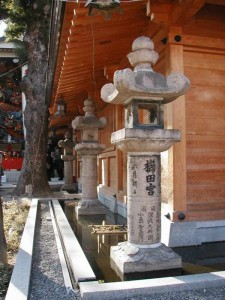 Welcome to Japan – where contradictions are a way of life. We’ll get the meaning of that in a few paragraphs, but first I need to apologize for my extended absence lately. I didn’t intend to be gone from the site this long, but I guess I just got into the groove of being lazy this winter vacation. It’s so easy to get accustomed to waking up at noon every day and thinking, “Man, what am I doing up so early?” 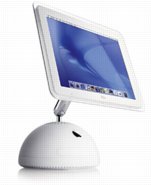 Either that or maybe I’ve just been distracted by my unbridled lust for the glorious new iMac, who knows? I mean, can you blame me? Just look at it!! That’s not just the monitor on a stand that you’re looking at, that’s the entire computer!! How does Apple do it!? I must have at least two, just in case something happens to the first one. I swear, I think I could write love poetry to Apple computers.

It’s been a while, so this is gonna be a larger, more picture-laden update to help quell the hate-mail my friends have been sending over the lack of activity on the site lately. It’s also kind of an update on my life so I apologize if it’s a little less Japan-centric than normal. I try to spin it to include commentary on Japanese culture, but sometimes I just lose track (Please see the above iMac comments if you don’t believe me).

We’ve also got a few more entries in the Engrish section for your brain-melting pleasure, which can be found here.

So while most people I know were going to exotic places for winter vacation – back to the States, off to London, over to Thailand, et al – I opted for doing absolutely nothing. I had no desire to mess with travel agents and all that crap and by the time that I figured out that I really kind of wanted to go to Hokkaido, it was far too late in the holiday season, so I decided it was better to just bag the whole thing and chill.

I still kind of needed to get ‘away’ from Japan though since I was kind of burnt out and sick of being a foreigner, so I basically stocked up on food, locked my doors, declared my apartment Scottland (no, that’s not misspelled) and seceded from Japan. It was actually kind of fun declaring independence from a major nation, and I strongly suggest trying it sometime. I wasn’t even contacted by Koizumi demanding I renounce my sovereignty or anything. 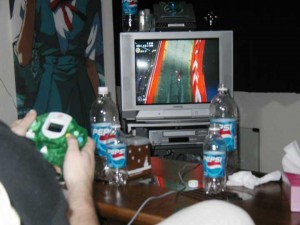 Anyway, the first amendment in Scottland was that all citizens must strive to subsist on no more than Pepsi and video-games. Actually that’s really the only law I managed to come up with. But for a week and a half the population of one was entirely law-abiding and the picture on the right was about the only thing I saw.

Sure I feel a little guilty about it all. I mean, I come all the way across the world, have two weeks of free time to go anywhere and do anything I want and I lock myself up and ignore the world? How lame.

On the other hand, I was rapidly approaching burn-out and sometimes you just need to let your mind and body be idle, you know? The last thing I needed was a “hurry up and relax” vacation.

I did manage and get out a little on Christmas and New Year’s However. So even though the season is largely over, I thought I’d share a few of my photos and experiences as kind of a Holiday Retrospective, if you will.