So I had mentioned that I was going to be playing Santa at a couple of Kindergartens over the holiday season. As you’ll recall however, I got extremely ill and was able to cop out of one of the visits, but not before St. Nick paid a visit to Jingo Kindergarten.

The teachers opened the floor for questions to Mr. Kringle and of course the first one was, “Can I have a present?” Kids are kids wherever they live I guess. 🙂 They also thought it was funny that Santa occasionally had to look up what they were saying in his handy electronic dictionary. Ungrateful little maggots. 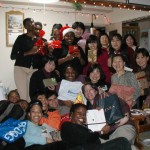 I wasn’t completely without the authentic Spirit o’ th’ Season® this year however. Kindra, an ALT the next town over was having a pot luck party and everyone was invited. Besides meeting tons of cool people and having a cool little present exchange, let me just say that Kindra’s meatloaf and sweet potatoes have a special place in my heart that few meatloafs or sweet potatoes will ever know (huh??).

For Christmas Day itself, I just couldn’t bring myself to stay in my flat locked up from humanity. Call me a sentimental fool, accuse me of having watched Bill Murray’s speech at the end of Scrooged one too many times, I’m guilty of it all. There’s just something about Christmas in the city. So with that in mind, I headed into town in the hopes of hearing some Silver Bells. 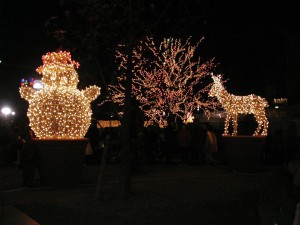 Sure enough, even in Fukuoka, there were lights everywhere and even a group of acappella carolers who set up a stage in the heart of the shopping district and were wowing the crowd, including myself, with their renditions of Christmas classics. They’re accents were surprisingly good and it was so touching to hear The Christmas Song that it nearly brought a tear to my eye. 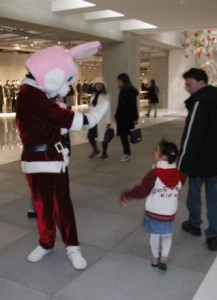 Then I had headed over to Canal City, one of the largest malls in the country, where happily I was able to see the giant Christmas tree you see above, but regrettably was also able to see this nightmare-inducing sight to the right. I overheard that little girl saying, “Hey look! It’s Santa…er, the Easter Bunn…wait, the Christmas Bunny, uhhh… Daddy, what the f#*%!?!?”