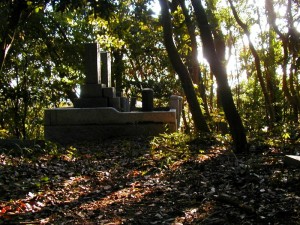 In Japan, the “Big” holiday is New Year’s Day. It’s a lot more solemn then it is in the States and there’s lots of reflecting, visiting family graves, prodigal sons returning home, et al. I grabbed my camera, hopped on my bike and went out on the day before (also known as “New Year’s Eve”) to search for pics. I didn’t find a whole lot since I was apparently the last person on Earth, but when visiting a park in town that I know of, I came across one of the cooler things I’ve seen so far in Fukuma.

There’s a concrete staircase leading up out of a remote corner of the park that obviously doesn’t get a whole lot of use as it’s heavily overgrown with bushes. Of course, that’s just an invitation to explore as far as I’m concerned so up I went, carefully avoiding the massive brain-eating spiders that seem to infest the countrysides of Japan (I don’t think they actually eat brains, but I’m not taking any chances!). 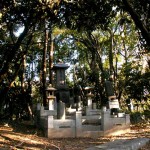 When I got the top of the hill I found a couple of old family graves that apparently everyone has completely forgotten about. As if the day couldn’t get any more quiet, try to imagine being on the top of a hill in a deserted forest on a windless day, looking at a trio of decaying stone graves. I’ve said it before and I can say it again without it being any less true: This is why I came to Japan.

The first visit of the year to a Shinto shrine is called Hatsumode (literally, “first visit”) and it’s a very big deal. Even though most Japanese people aren’t that deeply religious, almost everyone practices this tradition. I was in the city a week after New Year’s when smack-dab in the middle of urban chaos, a beautiful and quiet Shinto shrine jumped out of nowhere and sucker-punched me in the gut. I was in the middle of a shopping district for crying out loud (as you can see in the picture below) and yet here was a rather large ground, with numerous buildings and smaller shrines, lots o’ ancient trees and everything you would never expect to see in the middle of a city of 1.5 million. The unexpected contradictions in Japan never seem to get old, no matter how many times you rediscover them.

I ventured in and was surprised to see so many people taking Hatsumode so many days past New Year’s. As you can see, it was packed and people were still coming in by droves to pay respects to the Gods. 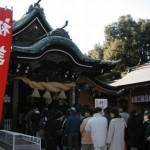 Here’s the way it works. After washing your hands and mouth at the temizuya (stone basin) to purify your soul, you enter the shrine grounds and approach the entrance to the shrine. You don’t actually go inside, but instead toss a 5 or 10 yen coin into the donation box behind the rail (I’m not sure why, but 5 yen coins seem to be the more prevalent choice). After that grab a hold of the large rope hanging down and give it a good shake which rings a bell to wake up the resident God and get his/her/its attention. Then, once you’re sure it’s looking, bow twice. 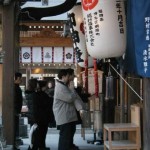 Then you clap twice as per Shinto tradition, to make sure the God is still paying attention (apparently it’s not unusual for Shinto Gods to suffer from ADD) and bow your head, making a brief prayer thanking the God for the fortunes of the past year. When it’s all done you bow once more and you’re off.

I’m not entirely sure what happens after that, but if it’s anything like 80% of other Japanese “traditions” it involves going to the nearest yakitori joint and getting drunk off your face while stuffing yourself full of roasted something-or-other. Like I said, the contradictions in this culture never seem to get old. 😉 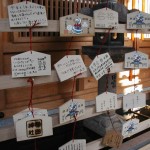 Around the corner in a quiet area of the shrine grounds was a rack holding Ema (literally: horse-picture). Each one has a personal message expressing wishes for the New Year. Because horses were once considered messengers of the gods, each one has a picture of a horse on it, hence their name. 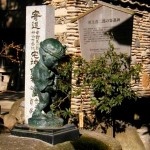 It appears the theme for this Holiday Recap is contradictions, because they seem to keep popping up. Keeping with the trend, I’ve got to mention that right in the middle of all this man-made and natural beauty, in the midst of solemn and soul-enriching traditions which stretch back hundreds and hundreds of years carrying on a sacred link between the living of the present and their ancestors in the ancient past, in the middle of all this… was a statue of a kid peeing. Right near the rack holding all the Ema New Year Wishes no less. Classless. :O

So there you have it. That’s what I’ve been up to while I haven’t been updating the site. On the whole it was a pretty neat vacation, and I didn’t have to spend a single yen on airfare. So, that’s all until next week, when we’ll look in depth at the story about how I completely ignored all the feedback people sent in on my hair and got a perm anyway. You can hardly wait, can’t you?