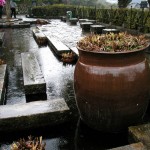 Don’t get excited, it’s not what you’re hoping it is. But there’s a section below that, by it’s very nature, requires that I affix the following sticker to this site:

So, enough of the intro, let’s just get to it. I’m too tired to BS around here. Content, here we come!! 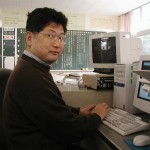 Here is a picture of Kumate-sensei. What a nice-lookin’ guy, eh? Kumate-sensei has become my best English student ever. He is intensely curious about learning new grammar, honing his pronunciation and even practices constantly on the other teachers. The catch? This week’s lesson consisted of ‘asshole,’ ‘shit’ and ‘kiss my ass.’ Doesn’t look like such a cute, cuddly teddy-bear of a man any more, does he?

Now before you start in on me for being a mischievous little bastard and corrupting the good citizens of peaceful Japan, let me tell you that this was all his doing!! He already knew ‘shit’ and upon learning what it actually meant, immediately asked for more.

He had heard ‘asshole’ in a Police Academy movie (ah, the Police Academy movies; America’s finest cultural ambassadors) and wanted to know what it meant. Before I could even attempt an explanation, Shiraki-sensei (one of the English teachers) jumps in and not only explains, but also gives him the variation of ‘kiss my ass.’ So you see, I actually had nothing to do with introducing him to any of it. But I figure he’s going to say it anyway, so he might as well pronounce it right. I coach accents, nothing more!!

So, this morning, I’m sitting at my desk waiting for the morning meeting to begin, having a nice intimate moment with my coffee, when what should I hear from the copy room but, “Asshole!! Shit, kiss my ass!!” A moment later, Kumate-sensei comes walking out with a smile on his face, pleased as punch that his pronunciation is coming along so well.

It’s so bizarre to watch this in action. Things that would result in black-eyes and lost-jobs back home, instead produce curiosity and praise from onlookers here. Case in point: yesterday as Kumate-sensei was working on one of the ‘public’ computers, Murayama-sensei came and sat down at the computer next to him. With no warning, Kumate-sensei turns and broadsides him with “ASSHOLE!!” to which Murayama-sensei responded, unflinchingly with applause (yes, he actually clapped) and said, “Wonderful! What does it mean?”

Kind of makes you think about what really makes those dirty words your parents told you not to say, so dirty after all.

Speaking of English and reasonable facimilies thereof, two more Engrish entries are up for your approval.