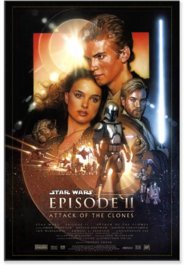 Okay, if you haven’t downloaded the fourth and final trailer for Episode II yet, what the hell are you doing here reading this!??! Go download it NOW!!! I’ll wait for a sec.

Okay you’re back? Excellent. Isn’t it amazing!?! For those of you who cheated and didn’t really download it, I’ll trust that you bookmarked the link and will get it later. Jawdropping is all I can say about the things I’m seeing in this trailer. I can’t even describe how massive a scale the battles are on. Skirmishes from Braveheart would get lost in a corner of these!

My good friend, Dan had some initial misgivings about how he thought Uncle George’s concept of visual innovation seems to be to fill the screen with as many elements as possible, but when I asked him if he would be satisfied if the fall of the Republic came at anything less than what is in this trailer (I mean, say the words“fall of the Republic”!! Can it really be too big!?), he came to see the light and quickly conceded the point.

Suffice it to say, I’ve got Episode II fever in a big way which has been reflected in a few of my desktop setups recently, which I’m particularly proud of and which are available for viewing in the Misc. section. (Fact: “which” was used three times in the last sentence alone. Did you notice?)

Speaking of my desktop, while working on last week’s update, I happened to notice how full my Dock was. Look at this thing, everything with a black triangle under it is a running application. For those that can’t be bothered to count that’s 22 apps!! And I was actually switching between most of them, so very few were sitting idle. Holy smokes! How many of you simultaneously use 22 applications? 😀