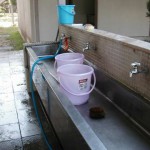 The school year works a little different in Japan. The main difference seems to be in how the breaks are. In the U.S. we get a few really big breaks (Christmas, summer, spring), while in Japan, they get an absolute ton of little breaks. Every time I turn around it’s another national holiday or a half-day or whatever. When one of my students heard that we get a two and half month summer break his eyes almost fell out of his head.

Another difference is that the school year finishes not at summer vacation, but at spring vacation. And as we’re coming up on Spring Break at the end of this month, we’ve been doing lots of End o’ th’ Year things here at Fukuma Higashi Chu. Let me fill you in on some of them.

If you remember way back to the first post, I mentioned that Japanese schools have the fine tradition of making the students clean their schools to teach them responsibility and…you know…stuff. This of course holds true for Spring Cleaning or as they call it O-souji [lit. Big Cleaning]. Students are assigned to different areas around the school and then it’s non-stop cleaning for the first two periods of the day. Not to be cynical, but the school doesn’t really look any different than after a normal day’s souji, so I’m not sure if that means that they do a good job of keeping the place clean normally so that there’s not much to do during O-souji or that they’re just so lazy that it doesn’t matter if you take 15 minutes or 2 hours, 0 times 8 still equals 0. 😛

In the process of cleaning the place up and clearing out the old stuff, they thought they would do the same with the students, so they clear out the third-years the day after O-souji. I wonder if I’m the only one that noticed that. Anyway, I actually don’t remember my Jr. High graduation, so I’m pretty sure it consisted of a boring assembly with a speech from our principal wrapping things up with “Right, see ya. Don’t let the door hit your ass on the way out.” As usual, there’s a different take on it over here.

It often seems that the Japanese education system is more in place to educate the youth how to behave in society, rather than to actually impart useful knowledge and skills. This can be seen in the lack of dialogue between students and teachers in class, the emphasis on after-school club activities(contributing to a group) and the slew of insanely strict rules that govern a Jr. High student’s life (I’ll probably do something on this in the next update). This focus on ‘societal training’ can be seen in the graduation ceremony as well. Instead of my lameo assembly, there’s a whole day (well, a half-day anyway) to have a school-wide sendoff of the third-year students.

It seems a lot more like a High School graduation, with all the speeches about going onto the next stage of your life, entering the world, we-hope-you’ll-always-have-a-piece-of-here-with-you comments and even a lined procession as the students walk out of the school gates for the last time. There’s a very conscious focus on looking at the bigger picture of how you’re fitting into things as you get older, which I definitely don’t remember being in my mind as I became a high school student (hell, I don’t remember that being in my mind when I graduated college!! 😉 I wasn’t surprised to see it in Japan, but I was surprised to see it as early as Jr. High school.

And just because it’s the last day of your Jr. High career, don’t think for a minute that you can get away with breaking any of the rules that have been torturing you for the past three years. You’re gonna comply to bitter end, my friend. As I mentioned in the photo of Masahiro and his spikey mohawk, even the hair is fair game for enforcement. One of the more rebellious students actually had the guts to come to school with his hair bleached (where would he have gotten an idea like that from??). Two of the teachers took him into the restroom with a couple cans of spray-on hair color and sprayed and sprayed until that dude’s hair was as black as night. Natsuaki-sensei returned to the Teacher’s Room with smug satisfaction written all over his face. “Now it’s pretty,” he proclaimed. I quickly hid in the copy room to make sure the same fate didn’t befall my hair as well. 😛

So when it was all said and done, I was sad to see many of my favorite students leave, even though I had only been with them for less than six months. Fortunately, during our final week of classes I had written my email address on the board and invited them to write anytime and tell me about their high school lives or whatever. It’s only been two days since graduation and I’ve already received about 10 emails. So even though I won’t be seeing them in class or chatting with them in the halls anymore, I do have a whole slew of Japanese pen pals to torture with English emails. Excellent!!