Changing of the Guard

I have recently become aware of yet another fascinating aspect of Japanese culture. In this case, by “fascinating” I mean “downright annoying.” It seems that every year there is a routine shifting of personnel within most government institutions. Each person doesn’t move every year (although some do), rather they move once every five or six years.

So what you get is, every year on April 1st, 5 or 6 staff members will up and leave and you’ll get 5 or 6 newbies that have no idea what they’re supposed to be doing. I couldn’t understand the logic behind this. I mean, why would you want to continually compromise productivity by taking people who know what they’re doing and sending them off to replace them with clueless idiots. The whole concept really annoys me, especially since that means that inevitably, some of the teachers at my school are going to leave, which is lame because I have come to really like all of them.

Since I had trouble figuring it all out, I figured I would ask a Japanese person (in this case, Shimamura-sensei) and as usual there was another side of the coin that I wasn’t considering.

Fukuma Hair Flap: So, does this routine job shuffling happen with all business or is it a government thing?

Shimamura-sensei: It is the style of public offices to change every year. For example, Town Offices, Schools, Police.

FHF: How many times have you been transferred in your career?

Shima: For me three times. This is the third school for me.

FHF: Here’s the big question; do you know what the logic behind it is? Why does it happen?

Shima: The most important point is to change the atmosphere of human relationships. 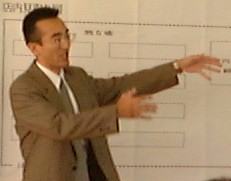 FHF: Is that the only reason, to change the atmosphere?

Shima: Why it’s needed is, after too long a time the same personal connections will be no good.

FHF: Do you see any advantages to the shuffling?

Shima: Yeah, when the new person comes to the new office, he carries his career with him, so it causes new ideas and a chance for more productivity.

FHF: Huh, that’s a good point. I hadn’t thought of that. What about disadvantages?

Shima: Well, if the new place is not suitable for him and his abilities than it’s a pity. Unfortunately, it’s not his decision where he moves.

FHF: I read that even Prime Minister Koizumi was mad that the Cabinet would have to be reshuffled this year because there were very good people who knew what they were doing that he felt would be most effective where they were.

FHF: Why do you think people still do it, even if they don’t like it and don’t see any reason for it?

Shima: It is needed.

FHF: In the end, don’t you think it’s stupid?

Shima: I think it’s better, because in Japan, private offices have no movement so it causes factioning within the office community.

FHF: No, come on. You don’t think it’s like, really, really stupid?* 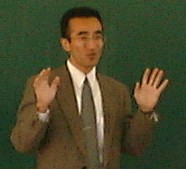 FHF: Like, if stupid were an animal would you say it’s Godzilla?

FHF: What about Mothra? Is it as stupid as Mothra?

FHF: Okay, well thank you very much. You’ve been very forthcoming with your answers. I’m sure that’ll go a long way at your trial.

*The last nine lines of this interview didn’t actually take place, but I thought they should have.