“I must warn you, Captain… I am easily offended.” 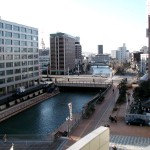 I don’t know how everybody else feels about it, but I don’t think there’s been enough pictures since I started the new format, so from today on, I’m bringing back the random photo at the top of every(well, most anyway) entry. The love just keeps on comin’, don’t it?

Until now that is. Ready for the Bitch o’ th’ Week©? Here it comes.

I have absolutely no problem with mandatory health checks. Public employees are public, hence they have a lot of contact with people (sometimes called ‘the public’), hence they (we) are required to meet certain health standards. I mean, you don’t want your own government going and getting you sick, right? I can accept that.

The issue I’m having is that my supervisor cannot guarantee the confidentiality of the results of said health test. She says that only the Superintendent of Education will see them, but then goes on to say that in Japanese people aren’t as private about these kinds of things and usually talk about their health test results openly to each other. Hmmmm, that’s not exactly inspiring confidence in her claim that only the Superintendent of Education is going to see or hear about these things.

The only reason I bitch about this is because, while I’m not a raging fatass or anything, I can pretty much guarantee (although I am working out again and getting thinner these days), that at the moment most doctors would consider me slightly overweight. Especially a Japanese doctor who is no doubt used to seeing bone-skinny people on the verge of malnutrition and actually having the gall to declare them healthy. Oh yeah, and Fletcher’s fat too. (heh heh, I can’t wait until he sees this.)

There are horror stories abound in the JET community of health test results leaking to the school staff who then either constantly mock or pester out of concern the poor JET who didn’t even want or need the test in the first place. It sometimes even gets as far as the students, and as everyone can remember since we’ve all been one at some time, Jr. High and High School students are rat-bastards. They won’t hesitate for a minute making your life a living hell simply because you like having a few pieces of bacon sandwiched between a couple of twinkies every now and then.

So I’m trying to figure out how I can explain to my supervisor that if anything that’s waiting to be discovered in my health tests, good or bad, gets to anyone outside the doctor or the Superintendent of Education, that I will be making lives hell. Remember that line in Casino?

Yeah, well my name is gonna be Nicky if anyone whose name doesn’t start with ‘Doctor’ or end in ‘kyoikucho’ (Head of Education) mentions even the slightest reference to my test results.

You heard it here first.

So enough of my bitching for now, it’s time to hear some of Fletcher’s bitching. Take a look at what he’s got to say by checking out the next post for his latest column.