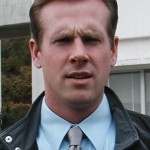 I’m going to let everyone in on a little known fact about daily life in Japan: no one uses signatures to sign anything. In fact, no one in Japan “signs” anything. So how do the Japanese people identify themselves in paper form? Hard, plastic stamps. That’s right, stamps. Or in Japanese, an inkan.

Remember back in the middle ages when important people like the king or some duke pressed some round thing into a gooey puddle of hot wax, thereby imprinting a certain image, such as a coat of arms, that distinguished him from other people with similar little round things? Well, me neither, not having been alive five hundred years ago, but I’ve read about it and seen it on TV, so it must be true, right? Anyway, signet rings, as they were called (I think), eventually went out of style in the western world sometime between the conquest of England and today (pick whichever one you like). In Japan however, they apparently never did.

You get the picture.

Every now and then someone might ask for some ID to verify that the inkan you’re using is, in fact, yours. But not often enough to make stealing someone else’s inkan seem like anything other than a pretty tempting way for some shifty person to practice a simple form of identity theft.

I don’t know about anyone else, but it seems a little dangerous to me that a stolen inkan can be used to do all kinds of potentially damaging things in that person’s name. I’ll give you an example. Every time Scott and I make any kind of business trip, such as traveling to an ALT conference, we fill out a travel expense sheet for our supervisor, who then reimburses us for our train fare. The only catch is that we need to stamp it with our inkan to “sign” it and make it official.

The other day, when Scott was in Tokyo, our supervisor needed us to fill out one of these forms. She nonchalantly reached into his desk, pulled out his inkan, and started to “sign” Scott’s form. I stopped her and told her to let me do it. I figured he’d rather me forge his “signature” than her. Maybe I’m being paranoid, but I just don’t like the idea of people being able to officially and legally attach my name to something by simply pressing a stamp to it.

The seemingly simple answer to this problem is to keep your inkan with you at all times, but ALT’s are strongly urged to keep our inkans in our desks at work so any necessary forms can be “signed” in our absence.

Remind me to never make my supervisor mad.

And even if we did keep it with us at all times, who hasn’t ever lost their wallet or left their keys or cell phone on a restaurant countertop or in a store somewhere?

Why are inkans still in use? At first I thought maybe because Japanese names are written in kanji instead of letters, the same name in kanji written by different people would look much the same, making it easier to copy anyway. But I don’t think so. Just as five different Americans could sign the name “John Hancock” with five different visual results, so would five different Japanese people write the same name in kanji with five dissimilar outcomes. Besides, how many English signatures accurately resemble the letters of the name they’re supposedly writing? I see no reason why names written in kanji would be any different. The only reasons I can think of to explain inkans continued use are the resistance to change that seems to be so apparent in Japan, and the lack of problems that have actually resulted from the kind of things I mentioned above.

Maybe inkans aren’t quite the problem I made them out to be, but my signature being the only acceptable form of identification would make me sleep a whole lot better. Can a signature be forged? Of course it can. We hear about it happening all the time, but I’m willing to guess it’s probably quite a bit easier when the signature you’re trying to reproduce has already been engraved into a piece of plastic for you.