So this is an update I had intended to post on Friday night of last week. It’s been sitting all but done on the desktop for two and a half days. I needed all of about 10 minutes to post the damn thing, and I haven’t even had that. 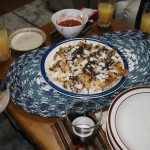 My schedule is such that it requires me, even on the weekends, in the middle of summer vacation, to wake up at the crack of dawn, leave immediately and not get back until late when I’m so exhausted that all I can do is fall down and start sleeping just to do it all again the next day. The main problem with this being that I can’t do things that need to be done, like laundry, dishes, or cleaning up anything from the nachos party me, Fletch and Ben had with three girls from work about three days ago now. Holy God my place just stinks right now. It’s honestly disgusting. I hate my life.

Despite the fact that the fallout from the nachos party has imbued my apartment with the stench of a decaying pile of raw death, the party itself was pretty fun and I make some [email protected]$$ nachos, if I do say so myself. Just look at em! Don’t they look delicous?

And yes, that’s the girls’ cocker-spaniel, Nonki, who is eyeing said nachos very suspicously. I think Fletcher likes this dog about as much as I do, because when hewasn’t spilling my chicken nuggets from the freezer all over the floor (damn you, Fletcher!!!) he was intimidating the dog by barking at it and scaring it shitless. That’s what the little bastard gets for crawling all over my couch (the dog, not Fletcher). You really should click on that picture, it’s quite hilarious. It’s things like this that make me proud to know Fletcher.

Of course, that didn’t really solve any problems because the dog still needed something to do, so he resorted to trying to hump his owner’s shoulder for the remainder of the night. Have I mentioned how pleased I was that there was a dog in my home? >:-(

So as you probably noticed, I managed to post last week’s ranting without the photos of the donut box that I was yapping about. Turns out that I can’t find the damn donuts anywhere now. They used to falling out of the sky. As I would walk down the sidewalk, people would actually roll down their car windows and pelt me with boxes of these donuts as they sped by. I’ve not the slightest inkling why they have suddenly disappeared, unless Japan ran out of plastic to wrap them in, that is.

I’m still working on this week’s Rave response to last week’s Rant. This week is going to be a hectic one since I have a shit-ton of things to do for work (more translation…mmmmmmmmm), on top of getting ready for my two-week trip to Tokyo and Kyoto starting next week.