Right, so the Health Check the other day was utterly ridiculous. 2nd graders playing doctor could have performed a more revealing inspection than these “doctors.” The only thing the 2nd graders would have lacked was the 400 year-old X-ray machine in the back of a truck(!!) they used to check for cancer, which I’m sure they’ll find in a few months thanks to that very same, antique cancer-inducing X-ray machine.

At one point I went behind the curtain and the doc checks out my breathing and heart and then feels around my neck area for tumors or something. She asks (in perfect English, which was weird) if there’s anything that’s bothering me. I stow the backlog of sardonic comments just waiting to leap out at her and mention that I’ve had a small tingle on my left shoulder on and off for the past month or so. She then feels around the shoulder area and tells me that both my heart and breathing are fine and that she can’t feel anything around my shoulder so she thinks I’m fine.

Gee, Doc, thanks for the laying on of hands. I’m sure the Gods will take my petetion for continued existence under careful consideration. Aren’t you even going to give me a leech to bleed my upper-left quadrant so as to relieve my shoulder of it’s unholy-imbalance of evil? Jesus Christ!!

According to the Japan National Cancer Center, malignant neoplasms, Heart diseases, cerebrovascula diseases (whatever the hell that is) and pneumonia are the top four causes of death in Japan. I could be in the final stages of all of them and these doctors wouldn’t have a fucking clue until I’m dead!! Even then, they’d probably just attribute it to natural causes. Man, screw this, I’m finding a Doctor that studied somewhere other than Japan and having them check out my shoulder. This is ri-goddamn-diculous.

It’s been rather quiet on the Engrish front recently (which reminds me, I still need to redesign the Engrish Page). I did however don my photographer hat recently and manged to get out and hunt down a few for your consumption.

It’s always neat to run across things you’ve done that you’ve forgotten about that didn’t seem like a big deal at the time, but kind of impress you after the fact. While searching for a file on my hard drive the other day, I came across a fax I sent to one of my Elementary Schools a month or so ago. It’s just a simple lesson plan, but if you had shown me this a year ago and told me that I would be writing documents in Japanese like this, I would have laughed in your face. Pretty cool.

As I’m in the midst of preparing for this week’s list o’ Raves about Japan, I figured we could open things with a brief blurb from our correspondant in Dazaifu, Angela (mmmmmmm, Angela). She chimes in with one of her little things that just makes Japan a neat place to live, despite their hideously incompetent moron-doctors. So let’s see what she’s gotta say. 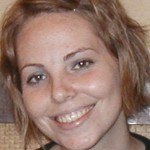 Let me introduce you to Running Man.  Our paths cross on our commutes to work.  He is always running towards the train station as I am walking away from it. We always pass at the exact same place, just like clockwork. 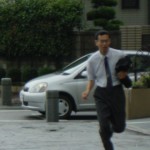 I can’t understand why he doesn’t leave a little earlier each day so he wouldn’t have to sprint to make his train.  I can honestly say that I have never seen him walking and I actually look forward to our passing each morning.

He puts a smile on my face every time.