“Coruscant, the entire planet is one big city!”

Heads up to everyone who just can’t get enough vicarious living in Japan! My dear friend, Nicole, has just recently launched her web site, A Life Less Ordinary. Why do you care? Because she lives in Japan!!

Oh yeah, and she’s cute…. that should help.

Anyway, her site takes the format of a print newspaper (cool idea!) and reports on events of interest from her everyday life as well as offering cool recepies from time to time and exposing heinous Engrish in it’s natural environment (Waitasec, that sounds a little familiar. Waitanother sec, I guess I ripped that idea off as well, so I shouldn’t get too upset).

It just debuted yesterday, so she’s still working on getting content up in all the sections, but things look promising. And it really pisses me off that the layout looks much better than my site. Damn you, Nicole!! Grrrrrrrrrrrrr. >:-(

So move your mouse pointer up…no, up….little more…right. Now right-click on the link to her site…..no, the link, not the flashing text…. there, now press the ‘Add Bookmark’ button……. good! Now check back every once in a while and see what she’s up to. It’s that easy. 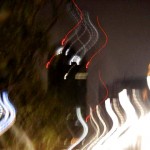 Right, so I should start off by apologizing for my sudden two-week absence. I was on holiday and had fully intended to be updating the site while on “the road”. What I’ve discovered is that if you’re planning on using the internet while on “the road” it helps if you bring the damn modem cable that hooks into your mobile phone!!!

So here’s a belated, special one-time edition of Tokyo Hair Flap to let you know what I’ve been up to during my outing to Tokyo.

I went to Tokyo for a week. It was good.

To put it in other words, you have not seen the sprawling megolopolis that is Tokyo until you’ve seen it from 75kph from the back of your friend’s scooter. My friend from Kumamoto is living in Tokyo while going to graphic design school and since he had an abundance of free time with it being summer break and all, offered to take me on a tour of the town…. and this is one big-ass town. 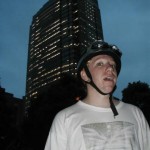 I was a little nervous when I found out he was going to be giving this tour with his scooter. I mean, where’s the roof? They just don’t seem safe. But, holy crap, the word “fun” just doesn’t even come close to being adequate to describe how fu…. er, <thesaurus power> euphoric </thesaurus power> it was.

The experience convinced me that I must procure a scooter especially if I’m going to stay here for a few more years. Gameless Marks™ ride bicycles; Groovalicious M.C.’s that grip the mic with a fierce fire-like funk and lay down dopeadelic fly-rhymes, the likes of which even God hasn’t heard…. these are the people that ride scooters. And I will be one of them. Then I’ll be justified in wearing über-cool helmets like this one. 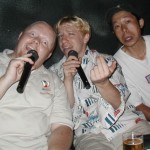 Speaking of gripping mics, I was able to meet up with Malcolm (actually he was kind enough to let me stay at his place for the week) and we and his co-workers all went out to sample The Karaoke. This of course prompted the question, is everyone good at karaoke besides me?? Malcolm busted out with his now-infamous and uncanny Louis Armstrong impression of What a Wonderful World which was only rivaled by Michelle’s gorgeous rendition of Dido’s Thank You. 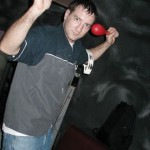 I was embarassed to follow these skillful displays with my stupid rendition of Informer (which I was bamboozled into doing in the first place). Man, say what you like about that song (for example, that it licks goat-nads) but it’s what we in the karaoke biz call, Tough As Hell™. Go on! Go to karaoke and sing Informer!! I….dare youuuuu.

Moving right along,I ignored the hangover next morning, which was screaming in my ear, “HEY, HOW’S IT GOIN’?! I’M A HANGOOOOVEEEER!!!” and went to a small town out of the center of the city and tracked down my own personal mecca: Studio Ghibli. 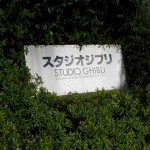 Quick Education for you non-anime watchers: Studio Ghibli is the animation studio of the genius filmmaker Hayao Miyazaki, who is responsible for such masterpieces as My Neigbor Totoro, Mononoke Hime and my personal fave, Porco Rosso. For those that haven’t heard my spiel before, don’t let the fact that these movies are animated fool you. This guy is often compared to Akira Kurosawa and, while their styles are considerably different, I feel their mastery of filmmaking warrants that claim. 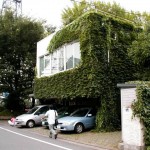 There’s a museum in Tokyo dedicated to the works of Studio Ghibli which I really wanted to go to, but I sadly didn’t plan far enough in advance and tickets were sold out (You’ve pretty much had to buy tickets for this place a month to a month and a half in advance if you want to get in since it opened). But the real treat was to see the actual building where so many of these movies came from, even if I wasn’t able to go inside.

Shameless plug: For those of you living in cities of size who are curious in what I’m talking about regarding this Miyazaki guy, rejoice. His recent film, Spirited Away (which is the top-grossing film in Japan ever (Yes, it even beat Titanic, sheesh) is being released in the states September 20. The Official Site is here, the trailer is available here, and a ton more info is available here. Take a gander, why don’t ya’.

Back to the vacation.

After snapping a few photos around Ghibli, I went back to town and hooked up with Tomokazu again and we went out to a Toyota museum/showroom/vomitorium/video arcade-type place. This is one of the things that makes Japan, Japan. The showroom was about three stories tall and all open space, like a huge warehouse. Hanging from the celing were racks of cars on shelves. On the floor in front of you was a pillar with pictures of all the different model cars with buttons next to each picture.

The process as this animated GIF shows, is simple. You first choose which car you want to see and press the button. An automated, hydrolic rack will find and load the car, then bring it down to your level, where the gate swings open and it pulls forward as show-lights pop out of the floor and illuminate the car. All at the push of a stupid little button. Incredible!!

They also had some cool driving simulators which were enclosed rooms with a car inside(!!) and the entire room was on hydrolics so as you’re driving around in the car and looking on the video screen the entire thing is tilting around. I was amazed at how well it simulated the feeling of motion and taking turns.

Next to last night, me Malcolm and the crew went out dancing in Roppongi. I have NEVER seen somewhere so crowded before. It was like packing 30 people in an elevator built for 10 – it’s something you can do, but it sucks… especially if someone farts. Anyway, back to the club. <ahem> It was a distance of about 30-40 feet from where we were sitting to the restrooms, but it was so crowded that if someone had to do it, it would take from 5 minutes to get there. 5 minutes for 35 feet!!

I didn’t really have any story-worthy….well, stories from the trip. It was pretty tame, but whole lot of fun and really refreshed my faith in my decision to be living in Japan. It was kinda like how when you put on funky-colored sunglasses, at first you say, “Whoa, everything’s red!! Far out!!” But after a while, your eyes adjust and you get used to it. Then later, you take the glasses off and your adjusted eyes see thereal colors again and you start shouting, “Whoa, crap!! My eyes are EXPLODIIIIIIINNNGG!!” and you’re screaming and hopping around while clutching your bleeding eyes and your friends are telling you to shut up and take it like a man because you’re making a scene and why can’t you bathe more often, and that shirt with those trousers, really…. Well, that’s what a week in Tokyo was for me. I hope the metaphor was obvious enough.

So, since I’m out of stuff to yap about, I’ll leave you with a few Engrish samplings and a bunch o’ random photos from Tokyo.

This website uses cookies to improve your experience while you navigate through the website. Out of these, the cookies that are categorized as necessary are stored on your browser as they are essential for the working of basic functionalities of the website. We also use third-party cookies that help us analyze and understand how you use this website. These cookies will be stored in your browser only with your consent. You also have the option to opt-out of these cookies. But opting out of some of these cookies may affect your browsing experience.
Necessary Always Enabled

Any cookies that may not be particularly necessary for the website to function and is used specifically to collect user personal data via analytics, ads, other embedded contents are termed as non-necessary cookies. It is mandatory to procure user consent prior to running these cookies on your website.