How could you make up a dance so great?! 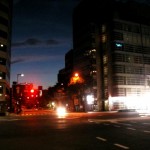 Summer vacation is over and today was the first day of school. I like the way they do it here. The first day consists of a homeroom meeting, a 45 minute assembly and going home. No classes, just easing everybody back into the routine so their fragile little minds don’t explode. Where was that in MY schools?

When I came to school after a month away this morning, I was shocked at how clean it was. Apparently someone noticed that the students just weren’t cutting it with their partisan efforts and did a proper job while everyone was away. Very impressive. So before homeroom this morning, what’s the first thing that everyone has to do? Souji (cleaning).

I haven’t forgotten that there’s still a Rave due in response to last month’s Rant. The daily grind is back in full swing so I’ll once again have time to work on things around here, so look for that later this week (knock on wood).

On a completely unrelated note: Best. Website. Ever. It has been decided; if and when I return to the U.S., I’m getting a DeLorean, gas-milage be damned.

I don’t often talk about books, but I will now. Everyone has probably read it before and I’m just playing cultural catch-up as usual, but it has to be said that I am immensely enjoying The Three Musketeers. There are so many great one liners…. and two liners and sometimes three. For example:

‘Dearest Madame Bonacieux, you’re a most charming person, but if I may say so, you’re extremely mysterious too.’

‘Does that make me any less unattractive?’

‘As everyone knows, there is a special guardian angel for drunkards and lovers.’

And then there’s Porthos. Who can’t love this guy?

At that moment Porthos came in.

‘Listen all of you,’ he cried. “Here’s a problem! Since when have musketeers been issued with leave permits without their applying for them?’

Maybe it’s just the brilliance of hearing Porthos be so….well, Porthos, but this is just too good, man! I read this bit on the shinkansen (bullet train) back from Tokyo and was LMFAO to the point that I had a nose-blast of soda. Oh how I long to burst into a room and suddenly proclaim “Listen all of you, here’s a problem!” 😀

One final thought from the domain of randomness: Is it even possible for Credence Clearwater revival songs to get too loud? I’m thinking no. I mean, try it with Born on the Bayou and you’ll see what I mean. That’s one swingin’ tune!!