Ellen has a posse 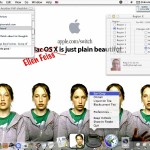 As you can see by my recent desktop setup, I have finally got around to catching Ellen-fever. It’s nothing sick and twisted, and strangely doesn’t really have anything to do with my Apple fandom. I just happened to watch her advert for the Apple Switch campaign in the right mood and found myself laughing uncontrollably. Now I find myself looking at my desktop and laughing uncontrollably as well. Now how can that be a bad thing? Go, Ellen!!

Speaking of desktops, there’s a couple new snapshots in the Desktops section, including our beloved Ellen. I’ve also got a poll in the desktops section regarding the size of the images displayed. If you’re someone who takes in a Desktop snap from time to time, help me out and let me know what you think.

And speaking of Ellen (have we stopped speaking of her yet?), if you like happy-bouncy electronic music, check out this track that some guy made using samples of Ellen from her Switch advert. So cool!!

Speaking of electronic music, the new Underworld album, A Hundred Days Off, just came out so I thought I should say a little something about that, being that they’re my favorite band and all.

Underworld is one of those special bands that truly defies categorization. ‘Electronic’ is really all you can say about them, and even that doesn’t really fit at times. I was nervous about this album since it’s the first one since Darren Emerson (DJ Extrodanaire) left the fold, but that fear seems to have been unwarranted as this is a great follow-up to Beaucoup Fish.

It’s slower than the last album, but that’s not necessarily a bad thing, since the boys are in usual form, i.e. taking their time to build a track up (their songs are usually no less than 7 minutes long!!) from nothing to a complex crescendo of awesome artificial sounds under a fat beat. As always, Karl Hyde’s abstract lyrics come off like the aural version of an impressionist painting, providing subtle images without really tipping you off to what the hell it is he may or may not be talking about. It’s like he’s not there to give a message to the song, he’s just adding his voice as another instrument. I’m sooo glad he wasn’t the one to leave the band.

Undoubtedly the highlight of the album for myself is the second track, Two Weeks Off, which is strange because the first time I heard it my first impression is that it was a little on the simple side. But the potentially annoying “baaaaaam bam-bam, baaaaaam bam-bam” synth repeating over and over just kinda grabbed me and made me say, “Wait, what was that about?? Let me listen to that again.” And now I can’t stop listening to it!!

Listen to me carefully: It is so damn happy, I can’t stand it!!! (Three exclamation points, just for Nicole.)

This website uses cookies to improve your experience while you navigate through the website. Out of these, the cookies that are categorized as necessary are stored on your browser as they are essential for the working of basic functionalities of the website. We also use third-party cookies that help us analyze and understand how you use this website. These cookies will be stored in your browser only with your consent. You also have the option to opt-out of these cookies. But opting out of some of these cookies may affect your browsing experience.
Necessary Always Enabled

Any cookies that may not be particularly necessary for the website to function and is used specifically to collect user personal data via analytics, ads, other embedded contents are termed as non-necessary cookies. It is mandatory to procure user consent prior to running these cookies on your website.