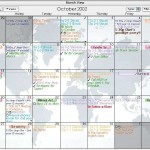 So, I’ve been a little sparse around here lately. I’ve just been busy. Not sure with what, just busy. Take a look at my calendar if you don’t believe me. I mean, I look at this thing a couple times a day and every time I bring it up I sigh and shoot the rest of my coffee and then chase it with a cup of espresso.

It’s kind of overwhelming. There’s just so much to do, be it work, cultural interaction (doing freelance teaching or hanging out with people that I don’t really want to but should because it’s ‘internationalization’), personal stuff (trying to see a movie or a concert, doing all kinds of pain in the arse shopping for things I don’t really want but need) and Stuff I Should Do (getting some amount of physical exercise so I don’t get any tubbier, cooking, replying to the 2 week backlog of email I need to get to). Before I know it, my days look like that calendar, things start to fall through the cracks and all of a sudden it’s fall again. I’ve been here a year now!! The words of Ferris Bueller are ringing in my head a lot these days.

“Life moves pretty fast. If you don’t stop to look around, you could miss it.”

I’ve also been having a lot of trouble sleeping lately. A lot of it has to do with all that’s been going on, I guess. There’s always 10,000 things happening at once to think about, then there’s CuteRomanianGirl who’s driving me up the wall trying to figure out what she’s all about and now…. now it’s the mosquitos.

Don’t ask me how, because I really don’t know, but somehow there are a ton of mosquitos in my apartment now. They go into hiding during the day, but at night, oh at night, they come out in droves. They buzz in my ear, they sting my hands and arms and occasionally my face and pretty much deny me of any and all sleep I might hope to find solace in. I killed SIX yesterday, and there’s another one in my room again tonight as I’m writing this in bed. I don’t know how they’re getting in, my doors and windows are constantly closed lately because of the construction happening to the exterior of our apartment buliding. Anyway, they’re here and they’re not hip with the idea of me getting any rest. Yes, friends. I’m a sleepy little ball of stress these days.

Thank God for coffee is all I have to say about this whole situation.

That bastard-mosquito in my room tonight that I was just talking about? GOT HIM!! I caught him trying to rest on one of my Björk posters. BIG mistake, buddy. Nobody messes with Björk on my watch. >:-)

It’s now 7:21am and I’ve killed about 7 more now. I also have not slept a wink tonight. I think one of them must have laid eggs somewhere because there’s just too many for them to have come in from outside. Damn, this is annoying. The only place I can think of that they came from must have been the kitchen. It got pretty neglected in there during the past two weeks, but I just cleaned it yesterday. Hopefully their numbers are starting to dwindle. I really need to get some rest.

You know, despite the offensive lack of sleep, I’m in an incredibly good humor today. I should give this deliriously fatigued thing a fair shake before discounting it in the future.