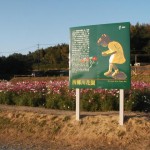 Well, well, well. Look at Mr. Pillar of the Community here. There was a recent flower festival in Fukuma and at the entrance to the huge flower garden the city had set up, they were planning on putting up a greeting sign. They wanted it to be bilingual though so they approached me and I whipped out the translation which appears in all it’s glory, typos and all, in the photo to your right (and a closer version which you can read here) which I understand at least a few thousand people saw (of which ten or so were probably able to read). I also did a parking sign, but it wasn’t nearly as creative since I just used canned “we’re not responsible for lost valuables” phrases. (It’s also come to my attention, that this paragraph quite possibly contains the most parenthetical ‘asides’ of any that has appeared on this site).

I’m not sure why they felt it was necessary to have English translations in the Middle of Nowhere Fukuma, but it was nice to see them at least thinking Internationally™ and it was nice that they thought to ask me to be involved. There may be hope for Fukuma yet.

Another Hair Flap first! We gots us some desktop wallpapers up now in the Misc. section. They are, of course, all photos taken by yours truly, featuring places I’ve been and have talked about on the site at one time or another. For space concerns, I’m only posting 1024×768 pics (as opposed to also including 800×600) since most computers can just scale it down automatically if it’s too big anyway. Feedback, as always is appreciated.