On the bike ride to school this morning I was kept company by a roving band of snowflakes saying, “Hey, Scott. We’re snowflakes. That means it’s fuck-off cold out here.” To which I could only reply, “Commie snowflakes!” Have I mentioned that the only room that has heat in the school is the teacher’s room? That means full-on, Mt. Everest, parka, snow gear when it’s time to go to the freezing classrooms and try to thaw out the the little student-cicles with nothing more than the soundwaves of my voice. I do not envy them in any way, shape nor form.

So, I got a pleasant surprise last night when I got a phone call from Bob saying that he and Dan would be showing up tonight, two days early, instead of Friday as originally planned. For those that don’t know them, Dan and Bob are friends from back in The Day®. They’re odd in that they’re brothers and yet they actually seem to like each other. It’s quite strange and creeps me out. They’ve been jaunting around Japan for a few days, will stay here in Fukuoka with me for a few and then later on we’re all going to meet in Hong Kong for 9 days and nights of New Year vacation phun. There are entertaining entries on the way; I have forseen it. 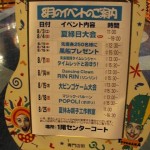 While I was looking through my photo collection today, in addition to noticing that I haven’t really been taking all that many photos lately, I came across this picture from a few months back, which I’ve been meaning to show you. This is a sign that I saw at a shopping mall, giving a schedule of events for the month. What kills me is the part that’s in English. Of all the things that could of been written as the sole English event, that popped up. Cracks me up every time.

As I was sifting through the photos, I also happened to come across a few new Engrish entries for your consumption. They’re not that great, but it’s been a while, I gotta give ya somethin’.