I don’t know why, but I just haven’t really been that inspired to write lately. Sure, it probably has a bit to do with the bronchitis that I’ve had for the past few days, but beyond that, it’s just been S.O.P. around here lately. Nothing new to report. No news is good news, I suppose, eh? However, coming up next week is my favorite holiday o’ th’ year and the Christmas season is in full swing around here, so I think I’ll just write about it all damn week. Cool? Cool, right.

Of course, being away from home on Christmas is always a bit lame. Not that Christmas in Japan particularly sucks, mind you. Especially in Fukuoka, there’s decorations in every store and outside on every corner and Christmas music blaring out of speakers indoors and out, and it’s all done quite well really. And sure, it’s commercial, but it is back home too, and that doesn’t diminish the Holiday Cheer any less there so why should it here?

And as a brief aside, I’m not buying that whole bollocks about the Japanese not really knowing what Christmas is about. Last year in class I prepared a Christmas trivia worksheet expecting to wow them with the revelation of Christmas being J.C.’s birthday and Santa actually being based on a real person, et al, and they all knew it already! It seems they know what it’s about just as well as anyone in the U.S. but they either:

a) disregard the religious aspect and just take the moral of the story with them.

b) disregard the religious aspect and use it as a marketing gimmick.

d) actually believe the religious stuff and celebrate it accordingly.

I think you’ll agree that these are about the same options that we choose from in the States, yeah? Only minus the weird association of the holiday with strawberry cake which they do here. I’m still trying to figure out where that one came from.

Anyway, to me, the commercialism, the decorations, the music, the sales, the people hauling around fuck-off heavy bags full of crappy presents for people they don’t particularly want to give them to, none of it leaves a bad taste in my mouth. I just love it all. (See the Eastman & Laird’s Teenage Mutant Ninja Turtles Christmas Special to get more of an idea of what I’m talking about. Me and Michelangelo were on the same page in that issue, boy.)

And of course, there are some things that I miss about Christmas at Home™. My family always blocks out a day on the weekend to decorate the tree (yes, we take the whole day. We don’t fuck around with tree decorating at our house, dammit!), while eating Hickory Farm cheese and beef sticks and watching Irving Berlin’s White Christmas, one of the ONLY musicals in existence to get my personal endorsement (that alone should speak volumes of it’s quality). And there’s the Polish cooking, and the ultimate family tradition, my father’s infamous purple bulb decoration for the tree, which is always the last to go on the tree (always near the top) signaling that the day’s ritual is done. I can’t really get all of these in Japan and they are indeed missed.

It’s kind of neat to see how, even though I have yet to have a family of my own, I’m already developing my own little Christmas traditions. A little one I’ve always liked has been to break out the Christmas issues of the afore mentioned E&L’s TMNT as well as an Uncle Scrooge special issue that are both incredibly touching and well written pontifications about what Christmas really means (and no, it’s not our boy J.C.). Sadly these are both in storage with my parents so I won’t be reading those this year. <sigh> 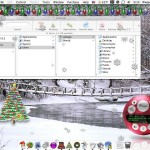 I think one of the most visible ones, and the one that made me think to write about all this stuff is my computer desktop. A few years ago after graduating uni and moving back to Portland, I was searching for a neato desktop image that oozed winter/Christmas. Ever since then, every year around this time, the infamous (in my little world anyway) ‘Winter on the Brule’ desktop from Northern Images has been my official Christmas desktop, which then serves as a basis to spruce it up with various other little holiday apps that make my desktop purr with the holiday spirit. I did it last year, so I’ll do it again. I present you with this year’s desktop snapshot.