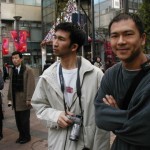 Right, so where were we? Ah yes, the plane landed. I was to meet Dan and Bob at the internet cafe in the airport since our planes landed within 20 minutes of each other. Brief Interlude – For those that don’t know them, Dan and Bob are brothers and my very good friends from years back, many years back actually, like all the way back when Bob’s voice was still indistinguishable from that of a little girl (I told you I’d have my revenge for the Tokyo Station debacle). This is a picture of Dan and Bob when they visited me in Japan in December. There, happy? Can I get back to the story now please?

So we were to meet at the internet cafe in the airport. Imagine my surprise to find that there are, in fact, two internet cafes in Hong Kong airport. Beyond that, they’re not exactly close to one another, like about five minutes away from each other. They could have been farther apart I guess, but when you’re hauling around a pack as heavy as mine was, five minutes gets old real quick.

So I sat down at one of them and waited for about 15 minutes past when we were supposed to meet at which point I figured I must be at the wrong one. So I loaded up the backpack and hiked over to the other internet cafe to find, of course, nothing. I decided to make good use of the time and check my mail. Waiting for me was a mail from Bob, telling me that he had arrived and was waiting… in the other internet cafe.

See what I mean? He had time to sit down, log in and write a mail in the time it took me to walk from one end to the other. I remounted my infernal backpack and hiked back to the other end of the airport again and finally found Bob. Dan was nowhere to be seen.

“He went to the other cafe to see if you were there.”

WTF??? How did we miss each other is my question. I mean, we had to have passed within five feet of each other since there is a direct line of sight from one cafe to the other (much in the same way that there is a direct line of sight from Earth to Alpha Centurai). Since I was just about sick of walking back and forth between cafes, and since Bob is just lazy (you know it’s true, Bob) we decided to just sit in the huge cushy chairs and watch CNN until Dan came back. I probably don’t even have to say this, but you know as well as I do that he didn’t.

So I got up and walked to the other cafe again found Dan sitting in that cafe’s huge cushy chairs and watching the same CNN that Bob and I had been watching before I set out on my 3rd trek across the airport. He asked if I had seen the story that was on a few minutes ago about the high-tech, safety tabel-saws. I don’t remember exactly, but I’m pretty sure my response somehow involved him and the act of eating of my poo. Then we walked all the way back to the other cafe and found Bob and all was well. I think this day topped any other on the trip in terms of calories burned. 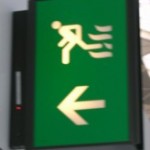 On our way out, we kept seeing these funny signs posted everywhere and couldn’t quite figure out what they meant. At first glance, I thought it was indicating a fire exit. But honestly the more I look at it, the less it looks like fire. I then offered the idea that if you’re about to be smothered by a tidal wave you should run in the opposite direction as indicated by the arrow. Bob thought it was directing anyone who’s being chased by giant knives to the nearest safe haven. Dan thought we were both stupid. We were never able to reach a consensus so I’m leaving it to you all to cast your vote and tell the citizens of the world what to do should they find themselves in Hong Kong airport and viewing these signs. After all, if the majority believes it to be true, it must be true, right? (Yes, that was sarcasm, don’t send me mail telling me why I’m wrong.) 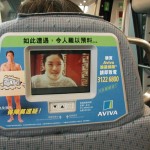 We hopped the airport tram into town which was totally cool. The thing just hauled ass and was dead silent, but the coolest part was the personal TV screen on the back of every headrest. You could change channels and they even had Tom and Jerry. Way cool! Once we got to Kowloon however, we weren’t entirely sure where our hotel was so we hopped into a cab and told the driver we needed to be at the Ramada. 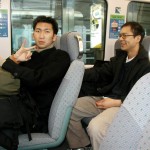 Now, I don’t know how many of you have been to Hong Kong, or have ridden in a taxi in Hong Kong, but these cab drivers are goddamn certifiable. The three of us formulated a theory (one of Dan’s favorite pastimes, to Bob’s chagrin, is constantly crafting and championing his own theories on life and the world), that in any traffic instance when it would be prudent to use the brakes, Hong Kong cab drivers find it equally acceptable to just use the horn instead so as not to waste all the energy moving your foot from one pedal to the other.

We were flying through Kowloon and were like, “Hey, buddy. Slow it down!!”

The driver shouted back, “Hey, Dr. Jones! No time for love!!”

Dude, I’m so good at telling a story.

We eventually found our way to the Ramada and rolled out of the cab before it resumed warp speed. With our backpacks on our backs (honestly, where else would they be?) we started stepping to the entrance and the front desk and our nice warm room with nice comfy beds. After a night of freezing my tender balls off outside of Tokyo Station and then about two hours of restless sleep in a coach class airline seat, I could hear the sweetness of our room calling me for a nap from the taxi stand. Upon noticing that me and Dan were following however, Bob turned and said, “Right, so you guys wait here while I check in.”

“Lemme guess…” I said, putting it all together.

Bob finished my thought, “They probably wouldn’t appreciate that we’re packing three people into a single.”

Surprises are fun, ain’t they?

Next time: The Entering of the Room, in which the room is, you know, entered.