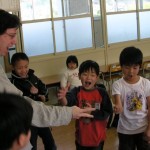 Man, this has just turned out to be a janken kind of week. Today, as it’s finals week at Jr. High there’s no classes since everyone is busy flunking tests, so I went to elementary school again, this time with first-graders. Upon arriving, I was introduced to a Korean lady whom I was told I’d be teaching with today. Teaching English? No. Teaching Korean? No. Teaching something having to do with anything? Of course not.

We would be teaching janken.

The American and Korean versions of janken respectively. You see what I mean about them being obsessed with it, right? 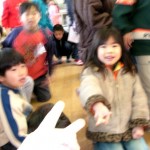 I never thought my arm would get tired playing Paper, Scissors, Rock. Until today, that is. <sigh>